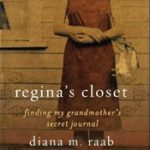 New nonfiction writing instructor Diana Raab has a lot of great publishing news to share! Diana’s memoir, Regina’s Closet: Finding My Grandmother’s Secret Journal (Beaufort Books, NY, 2007) is a finalist in ForeWord Magazine’s Best Book of the Year. In the memoir, Diana has questions she wishes she could have asked her beloved grandmother, Regina, a spirited woman who loved her, cared for her, and even taught her to type her first stories on a Remington typewriter. When Regina inexplicably took her own life at age sixty-one, ten-year-old Diana was devastated. More than three decades later, Diana discovers Regina’s secret diary. She learns all about her grandmother’s life—from the tragic death of her mother when Regina was twelve and her suffering in Vienna during World War I to her escape from the Nazis with her husband and daughter to her eventual arrival in the United States.

Diana is teaching an upcoming new course called The Writer’s Notebook and her anthology, Writers and Their Notebooks was also just accepted by the University of South Carolina Press (expected publication date Spring/Summer 2009). The book’s preface is written by Phillip Lopate and writers who have contributed essays include Sue Grafton, James Brown, John DuFresne, Dorianne Laux, Kim Stafford and Robin Hemley, to name a few.

Congratulations on both of these achievements, Diana!