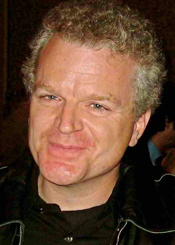 Congratulations to student Graham Jones, whose Mad Men spec “Our Man in Havana” placed as a finalist in the 2008 Scriptapalooza TV competition and won first place in the Teleplay Category at the 2009 WorldFest Houston International Film Festival. He also won second place in the Short Film-Historical Category for his film The Devil’s Own Work, which he rewrote in Quinton Peeples‘ “Rewrite Toolbox” course. Then, in May, Graham screened the film at the Festival de Cannes 2009 Short Film Corner. The film was made in the UCLA Extension Entertainment Studies directing class “Creating the Digital Short Film” taught by Matthew Harrison.

“The Writers’ Program has made me the writer that I am today, and I like to think I have gotten to be a pretty good one. The best thing about the Writers’ Program is that the instructors are all working professionals in their respective fields—screenwriting, television writing, novel-writing, or any combination of the above. I’ve always been able to find the class that I need while I hold down a full time job. And, lastly, the Writers’ Program staff is always helpful and available for any advice or assistance that a writer needs.”