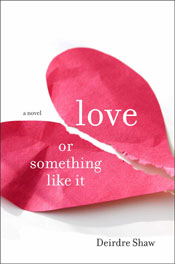 Deirdre Shaw‘s 2009 novel, Love or Something Like It, is a coming of age story about a woman in her early 30s who moves to Los Angeles, gets married, quickly gets divorced, and goes on to try to make a life for herself in L.A. Shortly after it was published, “Love” was featured in People Magazine and called “honest and vividly written.”

“The novel began years ago when I wrote one short story. Then I wrote another about the same character, and another. Eventually I had enough stories for a novel. I had a short story published in a literary magazine, and got calls from agents who liked it and wanted to know what I was writing. I signed with a fantastic agent who sold my novel to Random House. The moral of the story: you never know where your big break will come from. If you like a certain character, keep writing about her (or him). You’ll have the bones of a novel before you know it.”