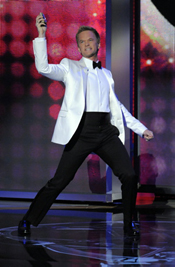 Not a week goes by here at the Writers’ Program that one of our students or instructors doesn’t make us proud. This week we blush with pride over screenwriting instructor and funnyman Bill Grundfest who, in addition to being an awesome teacher, co-wrote this year’s Emmy Awards. USA Today called the show “not just a better Emmy. It ranks up there with the best,” and the LA Times lauded it as “a playbook for all award shows to come.” I asked Bill to share the secrets of writing an awards show with us, along with some tidbits about Neil Patrick Harris and his favorite shows of 2009.

Writers’ Program: How did you get involved in writing the Emmys?

Bill Grundfest: I first got involved in writing the Emmys back when I was a baby (staff) writer on “Mad About You,” and was writing material for Paul Reiser’s hosting of The People’s Choice Awards. That’s where I met the show’s producer Don Mischer. We became great fans of each other (he’s the best human you will ever work for, including—especially–me), and he began hiring me for his other productions. This is why you should say yes to everything–“no” has no power. “Yes” is full of potential–you start down a brand new hallway and you never know which doors open off that hallway. As for why I love doing award shows–you get to write an amazingly wide variety of tones (from jokes to heartfelt intros for the obit packages) and for every star in the world.

Where else can you write “Arnold Schwarzenegger enters wearing a funny hat” and actually produce it? (That’s an example; he didn’t wear the hat). For a writer, it’s the world’s biggest toy box.

WP: What goes into writing an awards show? Do you meet with the performers/presenters beforehand?

WP: What are your favorite shows right now (Emmy nominated or not)?

BG: Magic School Bus (my kids are 6 and 4), which was not nominated. My favorite shows from this past Emmy season are Lost (I like being completely confused), Boston Legal (for Shatner-Spader), and House (for Hugh Laurie).

BG: NPH (as we refer to him in the goldenrod pages, which come out after the blue pages, which follow the pink pages, preceded by the ecru pages etc…) may be the most multi-talented, professional, completely in control of his “instrument” at all times, savvy, actor-performer I have ever been around. He has set a totally new standard for hosting.

Why don’t you ask how cool the writers are? Nobody asks that. It hurts a little…