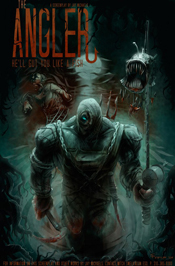 Screenwriter Jay Michaels, who has completed Writers’ Program certificates in both feature film and television writing, was a finalist twice over at the ninth annual Shriekfest Horror/SciFi Film Festival, held at Raleigh Studios earlier this month. He wrote the two screenplays, The Last Good Horror Story and The Angler, in his Writers’ Program classes, and in winter quarter will take his work to the next stage of development when he begins the Entertainment Studies Certificate Program in Directing.

“The Writers’ Program gave me both the skills and the support to push my writing further. Both Charles Rosin and Chris Webb spent a lot of their own time covering my projects along with guiding me through the pit falls along the way. Networking with my fellow students is another huge benefit of the program. I have met and stayed in touch with at least eighty people that I wouldn’t have met had I not been in the Writers’ Program.”

Congratulations, Jay, we look forward to seeing your work on the big screen!