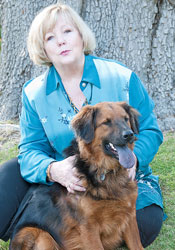 The success keeps on coming for instructor and mystery writer Linda Palmer, who has taught more than 200 units with the Writers’ Program. Her latest novel, The Proof is in the Pudding, was published in February by Berkeley Prime Crime. This comes on the coat-tails of “Mr. Wonderful,” her short story published in the anthology Murder Past, Murder Present.

The Proof is in the Pudding is part of a series of “culinary mysteries” written under Linda Palmer’s pen name, “Melinda Wells.” It details the story of Della Carmichael, host of a cable TV cooking show, who is chosen as one of three judges for an A-list celebrity cook-off. On the night of this black tie charity gala, a celebrity is murdered and one of Della’s closest friends is the number one suspect. In addition to trying to save her friend from prison, Della must break the law to protect her honorary daughter, who was being blackmailed by the victim.

Linda credits teaching four quarters a year in the Writers’ Program with keeping her writing skills sharp. “Sharing what I’ve learned as a published novelist to help students perfect their work is tremendously satisfying, and carefully editing their pages every week has kept my own writing energy high.”