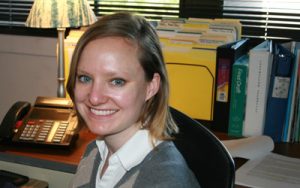 As reported here several weeks ago, screenwriting advisor-extraordinaire Chae Ko was promoted to top gun of the Writers’ Program’s screenwriting unit, with responsibility for more than 215 annual onsite and online screenwriting courses. The seat made vacant by Chae was finally filled last week when Hillary Hintzen joined the screenwriting unit as program assistant, and it’s been said that Chae’s sigh of relief could be heard round the Extension building.

Hillary is no stranger to Extension, having taken a handful of writing courses this past year while working as the assistant to the advisor of the Architecture and Interior Design Program. Hillary’s also a graduate of UCLA in American Literature and Culture and she studied film at Santa Barbara City College and in Rome, Italy.

You can learn more about Hillary, the newest addition to the Writers’ Program staff, in the interview below.

Writers’ Program: As you’ve likely heard, taking over for Chae as the advisor in Screenwriting means you have some pretty big shoes to fill. Tell us a little something about your background in advising in general, and in screenwriting in particular.

Hillary Hintzen: As assistant to the advisor of the UCLA Extension Architecture and Interior Design Program, I had the opportunity to advise students myself. I pride myself on listening intently to each student in order to determine the courses and instructors that will help each one realize his or her specific goals. In terms of screenwriting experience, I spent my first two years of college studying film. I took several screenwriting courses, a few theory courses, and even wrote several short films. But I’ve really been a film enthusiast my whole life. My uncle often recounts the story of me as a 7-year-old breaking The Little Mermaid into scenes so I could explain the story to him.

WP: In 2005, you had the good fortune to travel to Rome for three months to write, direct, and produce student short films. What was that adventure like?

HH: My experience in Rome was wonderful! I was fortunate enough to get a tour of the legendary Cinecitta studios and see the sets (or at least what remained of them) from hundreds of films, including The Life Aquatic which had just wrapped filming there. However, we spent the majority of our time writing scripts, drawing story boards and trying to shoot low-budget films without getting into too much trouble with the police (we didn’t have a single permit). It was definitely an exciting experience.

WP: What one movie would you watch over and over again and why?

HH: My choice of movie really depends on my mood. I absolutely love Dr. Strangelove! I’m a fan of Kubrick and I love that particular screenplay. It also features one of my favorite actors (Peter Sellers) in several amazing roles. It’s completely hilarious but has an important political message that I think resonates strongly even today. I also adore Breakfast at Tiffany’s. I actually like the film more than the novella (sorry Capote!). And who doesn’t love Audrey Hepburn?

WP: You volunteer as a literacy tutor at the Los Angeles Public Library. How did you get involved? What rewards are you reaping from the experience?

HH: When I graduated from UCLA with my English degree I wanted to find a way to make use of my education and to have a positive impact on my surroundings. As I was searching for volunteer opportunities I happened to come across the LAPL tutor website. The program is primarily for adults who speak English but have never learned to read or write it. You start by teaching basic reading and writing skills (sometimes as basic as the ABCs) and get the chance to watch them make quick progress. They are all eager to be there and they have concrete goals in mind, from reading to their children to finding a better career. The time commitment is only about 6-8 hours per week and it’s worth every minute. Promoting literacy is something that’s very important to me and I hope I can find ways to get further involved. I would definitely encourage others to join the program.

WP: Your interests include writing, music, and photography. If there were unlimited hours in the day, how would you spend them?

HH: I would definitely write more often. I always get brief moments of inspiration but run out of time to follow through with them. I’d also probably go for a lot of hikes with my camera. I love being outdoors and enjoy nature photography more than portraiture. I think I’d probably listen to a lot more music too. I worked in a record store for 2 ½ years and listened to music all day but I still feel like there’s so much more to explore. I feel the same way about books. I have a constant mental list of things I’d like to read and listen to, and it only gets longer!