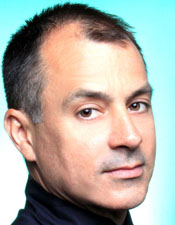 Just two weeks after the winners of the UCLA Extension Screenplay Competition were announced, 2nd place winner Terrence Michael is reaping the rewards. As a 2nd place winner, Terrence received a cash prize of $500, worked one-on-one with instructor and mentor Steve Mazur, and got his name and logline in front of more than a thousand studio execs. Since then, he signed with agent Chris Sablan of Original Artists as well as manager Chris Davey of Media Talent Group, and his script, The Girl with Something Extra, made it onto Imagine Entertainment’s weekend “must read” list! We can’t wait to find out where the buzz and excitement will lead Terrence next.

The Girl with Something Extra is a dark comedy about a boy named Elda Winnows who is raised as a girl by his domineering mother. When Elda attends public school for the first time, “her” search for love takes a surprising turn. The judges of the competition, Rick Berg, Robert Mitas, and Chris Sablan, praised the script for its well-developed characters and its unique and memorable story.

Says Terrence, “The UCLA Extension Screenplay Competition is well-respected and will definitely get your script read, but the mentorship program for finalists truly elevates it above other contests. The opportunity to work with Steve Mazur was incredible.”