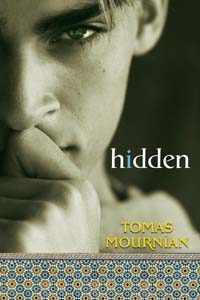 Tomas Mournian, who has taken screenwriting courses as well as Writing the Young Adult Novel, will have his first book, hidden, published by Kensington Books on January 25th. A launch party will take place on Feb. 5th. A freelance journalist, Tomas has been published in Los Angeles Magazine, OUT, and In Style. hidden, which follows a young gay man as he flees gay-to-straight bootcamp for a safehouse in San Francisco, is based on the investigative news article, “Hiding Out,” that Tomas wrote for the San Francisco Bay Guardian.

hidden is already receiving rave reviews, and Publishers Weekly calls it “exquisitely written and impossibly sad…readers will wait with baited breath to the end, almost suffocating on the palpable sense of fear and claustrophobia that permeates this heartbreaking story.”

Says Tomas, “It’s been a long road, but I wouldn’t have made the journey without teachers, and will always think of the Writers’ Program, despite all my angst and struggle. hidden might not have become publishable had I not taken Writing the Young Adult Novel. I started to see that story could be secondary to voice and once the main character started asserting his voice, I found the story.”