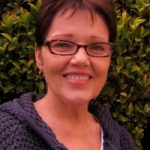 Former Writers’ Program student Cece Peri recently had her poem, “The Automat,” published in Noircon by Busted Flush Press. The poem was developed in Suzanne Lummis’ class Poetry Goes to the Movies: The Poem Noir. Last year, Cece was nominated for a Pushcart Prize for her poem, “The White Chicken Gives a First-Hand Account,” which she wrote in Suzanne’s class Writing the Persona Poem.

Cece has taken 15 poetry classes with Suzanne since 2004 and says, “After my first class with Suzanne I was hooked, or as a fellow student described it, I was Lummisized. She is an extraordinary mentor and teacher who gives her students the necessary grounding in craft and then encourages them to fly. I’m forever grateful to her and to the UCLA Extension Writers’ Program.”

Congratulations, Cece! Thanks for being a loyal Writers’ Program (and Suzanne Lummis!) student; we wish you continued publication success.