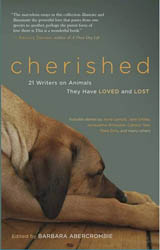 Writers’ Program instructor Barbara Abercrombie‘s new book, Cherished: 21 Writers on Animals They Have Loved & Lost, was published by New World Library on April 11th. Royalties from the book will be donated to Best Friends Animal Sanctuary, a rescue sanctuary in Utah.

“Cherished” is a collection of essays dedicated to the memories of animals that have touched the lives of the authors. According to Barbara, “This is a book for anyone who loves animals and good writing, and also for those who have gone through the loss of a beloved pet.” The anthology includes essays by well-known writers such as Anne Lamott, Mark Doty, Joe Morgenstern, Carolyn See, Thomas McGuane and Jane Smiley, but you’ll recognize several Writers’ Program names as well! Samantha Dunn, Billy Mernit, Linzi Glass, Cecilia Brainard, Sonia Levitin and Victoria Zackheim also contributed essays.

Says Barbara, ” working with these wonderful writers (all of them published, some with best sellers and one with a Pulitzer Prize, a number of them teaching in the Writers’ Program), I discovered that they were all incredibly generous and humble and more than willing to rewrite.”

Congratulations, Barbara. We hope you raise lots of money for the animals at the Sanctuary!