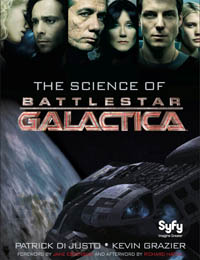 The editorial review on amazon.com says, “While the re-imagined BSG may not be packed with cool techie tools (the bad guys don’t even have laser guns for frak’s sake!), this book shows that the science in the series has a lot to say about the use of science and technology in our lives today. What are the principles behind artificial gravity and sublight propulsion? Are Cylons men or machines? How are humanoid Cylons able to interface with computers? By tackling these and other intriguing questions, The Science of Battlestar Galactica takes us billions of miles away from Earth so that we can turn around and see ourselves from a different perspective.”

“I believe that any writing practice improves our overall skill as a writer,” Kevin says, “irrespective of whether we compartmentalize the fruits of our creativity into screenplay, novel, teleplay, or short story. That said, the UCLA Extension Writers’ Program classes I’ve taken with instructors like Greg Elliot and Charles Rosin had a profound positive impact on my contribution to The Science of Battlestar Galactica.”