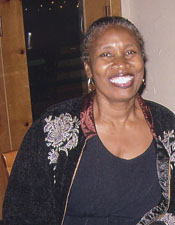 Writers’ Program student Beverly Smith-Dawson was named one of six finalists of the AZ Centennial Plays, a part of the Arizona Centennial Project’s New Works Series. As a finalist, Beverly received $100 and a full production of her one-act play, “One Summer,” during the 2011-12 MainStage Season.

In honor of the 100th anniversary of Arizona’s statehood, Arizona State University asked playwrights across the country to reflect on their views of Arizona and to write their impressions down in short plays. “One Summer” is based on a short story by Beverly that made the semi-finals in the short story category of the 2009 Moondance Film Festival. It’s about a summer in the life of an 11-year-old Arizona girl, when she and her family worked in the onion fields.

“Screenwriting is the most structured form of writing I have attempted,” says Beverly, a Writers’ Program feature film certificate student. “Because of the Writers’ Program, I have not only learned to work within that structure, but to enjoy it!”