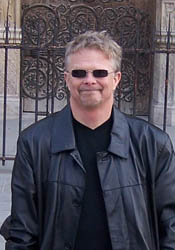 Poetry student Terry Stevenson’s “Noir Fragments” was recently published by NoirCon 2010. The poem was originally a “suite” of four poems that he first wrote in Suzanne Lummis’s course, Poetry Goes to the Movies: The Poem Noir. The poems attempt to capture the atmosphere of film noir, and two of them reference the films Double Indemnity and Chinatown.

Terry says, “Suzanne Lummis is a wonderful teacher who works hard for her students not only in class, but also in promoting their work outside of the class. My poems would never have been published without her assistance, and her comments and ideas made them stronger both individually and collectively.”