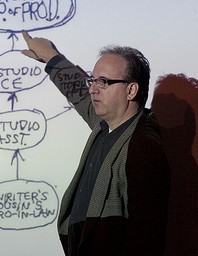 Former ad copywriter and professional feature film writer Jim Jennewein shares some of his knowledge and experience with the Writers’ Program, while also discussing the importance of “the scene” and his upcoming summer course.

Writers’ Program: I see in your list of credits that you’ve written original screenplays, sequels, and adaptations. Which do you most enjoy and why?

Jim Jennewein:Each has its own pleasures and special challenges. Originals can be tremendously liberating. You are writing only to please yourself. To complete the vision you have in your head. There are no producers or studio execs or movie stars looking over your shoulder second-guessing you and telling you what to write or not to write. All that comes later, of course, if you’re lucky enough to sell it. But the downside of originals is that more often than not, even if people like it you don’t always sell it. That’s why I say you have to write for the love of creating, not for the love of money.

I found sequels more fun to work on than I would have thought, mainly because some of the heavy lifting has already been done. The characters, for the most part, have been created and defined. The tone and the world usually have been created as well. Your job is to take those established characters in that established world and find a new journey they can go on that not only feels organic to the original but also gives the main character a fresh journey toward a new realization, a new truth to be revealed.

The toughest thing about adapting material that has been successful in another medium — say turning a TV show into a movie — is that if it’s a big enough property, millions of people have a very specific feeling about the characters. You cannot give in to the temptation of “doing what will please the audience.” You really have to follow your own heart and head to craft a story that makes for a great movie, and a movie that is still true to the essence of who the characters were in the original.

Wp’: How did you get your start as a screenwriter? Did you take classes, have a mentor, and/or catch a lucky break?

JJ: I was an ad copywriter for many years working at advertising agencies writing TV and print ads for a variety of businesses. It was this work experience that taught me how to write and think conceptually. Also, it taught me how to stand up in a roomful of strangers and orally present my ideas. After years of doing this I began to write movie scripts on my own. Once I began selling scripts, I discovered that the standing up and selling my work was as important a skill as doing the writing. So I was lucky to have done a job in a prior life that made me fairly good at pitch meetings as well.

Wp’: Was there ever a shift in belief or action on your part, when you felt like you went from just an aspiring writer to an actual writer – even if it was before an official “credit”?

JJ: My writing partner and I were very lucky. We sold the very first script we wrote together as a team and we sold it for enough money that we could both quit our ad writing jobs the very next day and jump into being full time screenwriters. And getting paid for a script was a huge confidence booster. Also, as I said, all the years I spent writing advertising made me feel I was already an “actual writer”.

Wp’: What advice do you have for aspiring feature film writers out there?

JJ: Read as many great scripts as you can get your hands on. They are all — or mostly all — available online. Reading good scripts and then analyzing why the writer made the choices he or she did — that’s the way I learned storytelling for the screen. I also advise students to watch movies at home and write down in simple one-sentence descriptions what the function of each scene is. Do that fifty or sixty times with any kind of movie, good or bad, and you will begin to get a firmer grasp of how to craft a story that works as a movie.

Wp’: What can your students expect from your upcoming scene-writing course this summer?

JJ: We are going to have a lot of fun screening great scenes and analyzing why they work. We are going to drill down into the core DNA of scene-writing to shed light on specific techniques students can use to make their own scenes better. And we’re going to workshop the actual scenes that the students are writing, too. And we are going to laugh.

Jim is teaching Making Your Scenes Better: A Workshop in Scene-Craft this summer, starting July 10th. Enroll online or by calling (310) 825-9971.