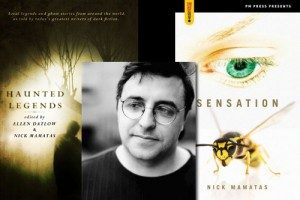 Do you dream of alternate universes, aliens, or time travel? Is the next In Her Shoes floating around in your psyche, just waiting for the right moment to spill onto the page? Or perhaps you’ve written a couple of chapters of a murder mystery but aren’t sure whodunit. While science fiction, chick lit, and thrillers may have wildly varying themes, they all fall into the category of genre fiction, literary fiction’s black sheep cousin. The good news is that it’s more popular—and respected—than ever before.

Even better news? The prolific Nick Mamatas, author of 11 full length books and dozens of short stories and essays, is bringing his genre wisdom to the Writers’ Program this summer with a new course, Writing Commercial Fiction. Read on to hear Nick’s thoughts about genre vs. literary fiction, making the time to write, and why you should get off Facebook.

Q. For those who may be unfamiliar, how would you define genre fiction? In what ways does it differ from traditional “literary” fiction?

A. I use a historical approach—there are different traditions that came out of the popular magazines of the late nineteenth and twentieth centuries. The magazines for the newly literate working classes were inexpensive and published on pulp paper; for the middle class, they were more expensive and published on “slick” paper. Even today there are still remnants of the pulp/slick divide. The paperback revolution further reinforced the division between genre fiction and literary fiction. Basically, what the pulp magazines were about: science fiction, romance, Westerns, mysteries, “women’s fiction”, and some genres we don’t talk about much anymore (sports fiction; fiction about starlets and airplanes and sailing ships) are the commercial genres. Bourgeois realism and its daughter genres of modernism and post-modernism are literary. It’s ultimately a matter of how social class was experienced a hundred years ago.

Note that “literary” is often conflated with “high quality”, but of course there is plenty of realist junk, and plenty of genre works of genius.

Q. You’ve published eleven books as well as dozens of short stories, essays, reviews, and poems. As someone so prolific, what advice do you have for someone who is just getting started or struggling to complete their first manuscript?

A. The basic practical advice I have is to eliminate the Xbox or Angry Birds or other such thing from your life. People have much more leisure time than they think they do. If you can type on Facebook on your lunch break, you can type a paragraph into a Word file.

More fundamentally, when a writer actually has something to say, he or she is unstoppable. I often think of two acquaintances of mine: one wrote his first novel while working in a factory. Not that he worked all day, came home, and wrote—he wrote in the factory, in thirty-five second bursts, while waiting for the next SUV to come down the line to his station. Six ten-hour night shifts per week. My other acquaintance has a significant physical disability; he wrote his book by grasping a chopstick and using it to hit the keys on the keyboard.

Q. With so much information available on the internet and bookstores, what is the benefit of being in a “classroom” (in your case a virtual one), as opposed to researching and working on your own?

Of course many writers have become successful, or gotten good, without a formal classroom experience. But most writers did have some sort of community of fellows with whom they shared their work and ideas. It can be difficult to find such communities these days; a classroom is like renting one.

Katy Flaherty is the Program Representative for Creative Writing (Online) and Events. Write to her at kflaherty@uclaextension.edu.