The Act of Playwriting 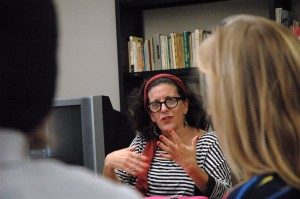 Despite the reputation that Los Angeles has for being a world of plastic people and Hollywood special effects, the art and culture scene is thriving. We are fortunate to have access to up-and-coming artists in any form: live music any night of the week in Hollywood; world-class museums; cutting-edge fashion made right downtown in the fashion district; and literary events at local bookstores (which do still exist!) There is always something cultured to do here in our lovely city.

Another form of entertainment that thrives in Los Angeles is the world of live theater. Plays are perhaps one of the world’s oldest forms of entertainment, a form that is still very much alive and kicking today. This summer, the Writers’ Program offers Writing Yourself onto the Stage: The 1-Person Show with Laurel Ollstein to help students master the process of playwriting. We recently sat with Laurel to discuss her class and the genre.

Writers’ Program: Tell us a bit about your new class coming up this summer, Writing yourself onto the Stage: The 1-Person Show.

Laurel Ollstein: This is a class that I love to teach. I have written and performed several solo shows myself, and I’ve had the pleasure to work with many writer/performers who were creating their own shows. I love the process. It’s the ultimate in theatrical writing in many ways. Anything is possible – you can go anywhere – be any one – it’s all in the writing… and performing. But this class is focusing on the writing. We will be investigating successful one-person shows. Why do they work? Why don’t they work? Which of them might be like the show you might want to create or are in the process of creating. We’ll write in-class exercises to help mine the ideas and voices that are in your head. I’ll get you up on your feet to hear the words out loud in order to workshop the piece. This is a four-week course, so my hope is that each student comes away with at least one monologue that they can build on for a bigger show.

Wp’: What sets playwriting apart from other genres, such as novel writing or screenwriting?

Laurel Ollstein: Writing for the theatre is a different world. The writer needs to engage the imagination of their audience in a theatrical way. In a film you can go to a location. Show a disaster. In a novel a writer can say what’s going on inside the characters head and roam around in there. Well, in theatre you need to show what’s going on inside your character’s head. You need to open up that head and spill it onto the stage. In theatre you can create any world – real or magical – tell the story backwards or jump around in time. Anything goes as long as your audience knows the rules of your play. You don’t ever want to confuse your audience. But also don’t talk down to them. People are smart. They want to be engaged intellectually. In theatre you want your audience to lean forward, not sit back. It’s thinking in a different way, particularly with a one-person play. There is only one actor on stage telling a story – or showing a story – bringing an audience into a story. They have the words, lights and sounds to do it. Usually with solo shows the set is very minimal – which makes them very portable, and creates more opportunity for performances in festivals all over the world.

Wp’: Who are some great contemporary playwrights that those new to the genre might check out?

LO: There are SO many. But right now I am interested in the works of Lisa Cron, Mary Zimmerman, Sara Ruhl, Marina Karr, Caryl Churchill, Lynn Nottage… (notice I’m recommending women – because women playwrights are very under produced in theatre right now – and it ain’t because of a lack of talent) But you should also read Tony Kushner, Henry David Hwang and Kristoffer Diaz – just to name a few.

Wp’: Do you have a favorite piece of writing advice?

LO: Keep your butt in the chair. That’s the best advice that was given to me. Just keep doing it. And try to quiet your critics – inside and out. Allow yourself to write badly – write shitty first drafts — and rewrite rewrite rewrite.

Sara Bond is the Program Assistant for Creative Writing.