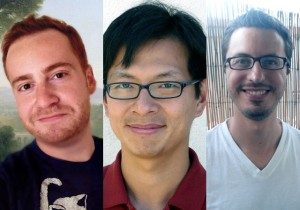 First there was the Feature Film Writing Competition. Then came the Television Writing Competition. This year, the UCLA Extension Writers’ Program added a third option to the mix by splitting the Television Writing competition into two distinct categories: TV Pilot Writing and TV Spec Writing. The goal of all three competitions remains the same: to help talented students of the Writers’ Program gain valuable Hollywood exposure for their outstanding work.

Here, in no particular order, are the finalists of the 2012 Pilot Writing Competition and their loglines:

When Max, the Lake Street Zoo’s most eligible panda, thinks he’s ready for a relationship, he gets more than he bargained for with his sex-crazed new roommate Susan. Arthur the baboon has a communication breakdown with his wife, while Charles the platypus works through an identity crisis.

Clay Ehrmann, a disaffected, agnostic teen who wants to break ties from his religious hometown in the South, experiences a vision that challenges his beliefs and presents a major snag in his plans to leave town.

Patrick Moss for his one-hour pilot, Hand to Mouth:

Set at the dawn of the late 1970’s New York foodie movement, an aspiring cook who works in a groundbreaking, raucous, downtown kitchen forms an unlikely mentorship with its punk-rock chef.

As finalists, Mark, Franklin, and Patrick will work 1-on-1 with a mentor who will help them prepare their scripts for the final round of judging, after which they will receive cash prizes, have their names announced in the Hollywood Reporter, and get their names and loglines in front of more than 1,000 industry managers, agents, and producers. Read on for the impressions of these three talented writers including what it means to be named a finalist.

What brought you to the UCLA Extension Writers’ Program?

Mark Goldfinger: After independently studying several books on TV writing, and finishing my first spec script, I put my pen down, having mastered my craft on the first try. But when I actually read the script I realized that it wasn’t the best script ever written in the history of television, despite what my family had insisted. I signed up for UCLA Extension classes to get some honest feedback from people who don’t care if they hurt my feelings, so long as the writing gets better.

Franklin Rho: Some friends of mine had taken classes at UCLA Extension and had high praise for the classes they took. I know this sounds like I’m a shill for the program, but the combination of quality instruction and reasonable cost can’t be beat.

Patrick Moss: I’m always looking for ways to become a better writer. Specifically, I wanted to develop an original pilot. I was looking for a constructive place that would let me workshop my ideas face to face – even pitch my bad ideas – and I wanted to get feedback pretty quickly. I’d say the pilot class I took was really good for that.

What made you enter into the UCLA Extension Television Writing Competition?

MG: It seemed like a solid competition because there weren’t any crude pop-up ads trying to peddle an “essential” writing course. I’d also taken a class with last year’s winner, and she appeared happy that day. Also, I seek validation from strangers. But don’t tell anyone, whoever’s reading this.

FR: The short answer is, Why not enter it? I felt pretty good about the pilot that I submitted and figured that I could either let it collect dust or take a shot and see what happens. The Competition offers compelling perks with minimal cost and effort… aside from writing the pilot, of course!

PM: Why not enter? See how my work stacks up, because you never know unless you apply, right?

How does it feel to be in the top three? What are you most excited about?

MG: Sorry, what was that? I couldn’t hear you over the celebratory gunfire. But seriously, I’m very excited to work with master writer Phil Kellard and hopefully get his stamp of approval. I have tremendous respect for Phil’s work and can’t wait to hear his suggestions for improvement. I bet it’ll be like getting wrestling lessons from Andre the Giant. With the metal folding chairs and everything!

FR: It feels both validating and humbling. I’m excited about the opportunity to get more exposure as a writer and make more contacts.

PM: The validation certainly feels nice and encouraging, considering who the judges are. To me, the best thing about it is the chance to get read by mentors and an industry-wide audience.

Which courses/instructors in the Writers’ Program have been your favorite while developing your winning script?

MG: Julie and David Chambers’ TV Pilot class helped me develop the series concept and think about what makes an interesting pilot. And Alan Kirschenbaum’s Rewrite class was essential in reworking drafts and opening my eyes to what expert rewriting is supposed to look like at the professional level. Julie, David, and Alan are all terrific models for what young writers should strive for professionally and personally.

FR: Since I’ve started taking TV courses, all three of my teachers were awesome in very different ways. That sounds like a cop out, but it’s true. I’m not sure that I could have found a better person to introduce me to TV writing than Joel Thompson. His enthusiasm and passion to help the young writer was inspiring. Greg Elliot has a gift in his ability to refine and reinforce the skills and discipline necessary to be a working writer. Finally, Chuck Rosin has been a tremendous mentor, teaching me a lot about the realities of the business.

PM: I wrote an outline in Chuck Rosin’s class. Chuck let me pitch a laundry list of ideas and was great about giving me feedback. What I liked the most was that he really pushed me to write something I was passionate about –the kind of story that could only come from me. It sounds obvious in retrospect, but that was the first time I had approached pilot writing in that way.

Huge congratulations to Mark, Franklin and Patrick, as well as to our semi-finalists in the same category (in no particular order):

For details about next year’s competition and how to apply, click here.

Chae Ko is the Program Representative for onsite and online screenwriting courses. Contact him at cko@uclaextension.edu.