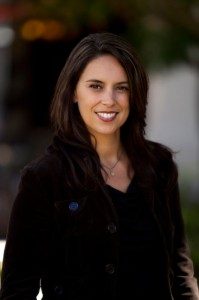 If you’re not familiar with the name Veronica Rossi, you will be soon. Following in the footsteps of Orson Scott Card and Suzanne Collins, Rossi—with her blockbuster breakout novel Under the Never Sky—is proving that YA can be relevant, thought provoking, and wildly popular among adults. Foreign rights have sold in over 25 territories; Warner Bros. has optioned the film rights; and her second book in the series, Through the Ever Night, will be released in January 2013. I recently picked Veronica’s brain on writing, success, and how she got here.

WP: In Under the Never Sky you’ve created a landscape very different from our own. How did you go about “building” this world?

VR: I knew from the beginning that I wanted to juxtapose two different characters—and that one would be thrust out of their comfort zone into a foreign and dangerous world. I also wanted to play with contrasts. Past versus future. Technology versus primitivism. Artificial experience versus the extremely corporeal and sensory.

I spent several weeks reading on topics that interest me. Then I spent a few weeks doing free-writing exercises and staring at the wall. The societies and landscape of the story emerged from that time. I think you can plan and world-build, but there are always discoveries during the writing process. That’s part of the magic.

WP: What inspired you to write this novel?

VR: There are two specific images that inspired the story. A few years ago, my son was playing a game on an iPad and I remember being struck by how intense he looked, almost stressed, and by the cold blue glow of the screen on his face. The next day, we were out in the backyard by a fire roasting marshmallows, and it was the exact negative of that image. He was so relaxed and the light on his face had this mellow, golden quality. The two worlds in Under the Never Sky—technological and primitive—began from those images.

WP: With the recent blockbuster success of The Hunger Games, YA novels are taken seriously in both the publishing and film industries. Is Under the Never Sky headed in this direction?

VR: I do hope so. The response from fans has been terrific. I hear from readers of every age, gender, nationality. It’s an exciting genre to be a part of. I love what I do. I feel fortunate every day.

WP: Tell us a bit about your background with the Writers’ Program. What drew you to the program and what did you gain from the experience?

Veronica Rossi: A few years ago, I took several online novel classes with Lynn Hightower, beginning with Novel Planning: Bringing Order Out of Chaos. I’d been writing for a few years, and I was looking to bring my storytelling to the next level. Lynn gave me great tools for getting a novel started. I still use them.

WP: Where do you go for inspiration when you are feeling drained or blocked?

VR: I sit down and write anyway. Sometimes feeling “blocked,” is actually a cover for feeling lazy or unsure about your work, and the only way out of that is to write. Really, anything that relaxes the psyche and/or is inspiring can help. The bottom line is to be honest with yourself about why you’re not writing, and then attack that until you’re back on track. Writers write, after all.

Katy Flaherty is the Program Representative for Creative Writing (Online) and Events.