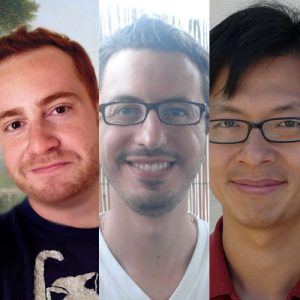 Exposure is a key factor in launching any writing career, and that’s a big part of the prize for the three talented winners of the 2012 Television Pilot Writing Competition: Mark Goldfinger (1st place for the half-hour animated comedy Lake Street Zoo); Patrick Moss (2nd place for the one-hour drama Hand to Mouth); and Franklin Rho (3rd place for the one-hour drama Revelation). They each received a cash prize of $1,000, $500 and $250 (respectively); were featured in a full page ad in The Hollywood Reporter; and their names and loglines were recently sent to more than 1,000 entertainment industry executives. Below, Mark, Patrick, and Franklin weigh in about the past, present, and future of their writing careers. Be sure to check back with us in December for a follow-up article on their progress.

Wp’: So, what made you want to be a writer in the first place?

MG: I see how happy a good episode of TV makes people feel, and I know I want to be a part of that tradition. Contributing to culture in such a big way sounds exciting.

PM: When I was growing up, TV shows like Homicide and The Wonder Years captured my attention, inspired me and made me want to write for TV. But the truth is, I’ve just always liked to write. It’s always made me happy and it just seems to “fit.” Even better, I LOVE having written! Nothing feels as good as typing out “The End.”

FR: In middle school, I was way into this girl and had no earthly idea of how to approach her or convey my feelings for her. Inspired by The Smiths, I looked into writing prose and poems but my attempts were a dinosaur-killing, crater-sized disaster. My middle school muse came and went, but the writing stuck around and gave me a much needed outlet for my Angry Young Man- years. Yes, they were very angry and very young; I really don’t know how I would have survived without the writing.

Wp’: How has the Writers’ Program shaped or advanced you as a writer?

MG: The most technically useful part of the program has been learning what to look for during a rewrite, understanding why something doesn’t work, and how to fix it. I’ve picked up so many practical tools that I now use to improve every script. When all you have is a hammer, you should probably head over to the tool store.

PM: Both Chuck Rosin and Alan Kirschenbaum gave me a solid framework for how to approach pilot writing: characters, world, family, scene-work, etc. But my most important take away is for me to be my own audience: write pilots that I’m passionate about, push myself to pitch series that could only come from me, create shows that I would actually want to watch.

FR: Aside from placing in the competition (which is definitely opening new doors), I’ve gotten to meet some amazing writers, both peers and mentors. It’s helped to build a community and take me out of the lonely vacuum that is so often the writer’s existence. I know the Emily Dickinsons of the world can live and even thrive in that vacuum, but I’m no Emily. I wish I had figured that out much sooner. The Writers’ Program also opened my eyes to the possibility of writing for television. Thinking that I was going to do features and nothing else, I had previously disregarded television. File that as mistake #24601. At present, television offers the best combination of commercial and artistic rewards. If I should be lucky enough to get the break I’m looking for, I’ll owe the Writers’ Program a ton of the credit.

Wp’: What are your creative and/or professional goals for the future after winning this competition?

MG: Great question. Creatively, I’d like to get my speed up to where I can write 4 new pilots a year. Professionally, I’d like to sell 4 pilots a year. Realistically, I’m hoping to get in a writers room soon and continue learning from more experienced, more talented, and funnier writers than myself.

PM: I’m currently out with a network series pitch — so my hope is that it gets sold! But off this competition, I’m going to use my pilot as a calling card to meet producers and executives who’ve become fans of my work and hopefully I’ll staff on shows they’ve already set up — or maybe collaborate on something new. Either way, it’s all about new writing and new challenges.

FR: Aside from getting paid writing-work (followed by continuing to get paid writing-work), I’ll continue to learn and develop my craft so that someday (hopefully sooner than later), I can create both successful TV series and features. What drives me creatively remains the same though. I want to create stories that find a dedicated audience, to create something that really speaks to someone out there. I want a long, productive career in pursuit of that one, unattainable perfect creation. That’s not too much to ask for, is it?