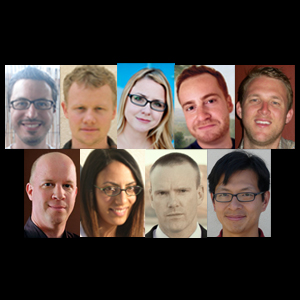 Each year, the Writers’ Program hosts competitions open only to its Feature Film and Television Writing students. The top three winners of each category are featured in a full page ad in The Hollywood Reporter and their names and project loglines are mailed to more than 1,000 entertainment industry executives. They also receive a cash prize of $1,000, $500, and $250 (respectively). The Writers’ Program recently followed up with the talented winners of this year’s competitions to assess their progress.

From the 2012 Feature Film Writing Competition

Markham Cook (1st place winner for his thriller Restoration), was contacted by many agents and production companies, both big and small, who were interested in his script. In September, Markham signed with a Los Angeles based agent at Original Artists. A director is now attached to his script and Markham has been fine tuning it before it goes out to producers. Restoration also finished among the top 30 in this year’s Nicholl Fellowship Competition. Since winning Markham said, “the process has been interesting and wonderful, kind of a ‘post graduate’ course in Hollywood screenwriting.”

Chandra Wicke (2nd place winner for her drama Surviving the Captain), was contacted by about 15 production companies, one agency and two management firms. Currently, Chandra is developing an original TV pilot at the request of a company she met as a result of the competition. She is also pitching another feature to a production company that does made-for-TV movies, and her winning script has been sent out to directors on behalf of several interested producers. “Overall, the contest has made me think about who I want to be as a writer and has helped me develop some career goals, in addition to giving me a whole network of industry contacts,” Chandra said.

Eric Borden (3rd place winner for his detective mystery Fever), said that sifting through the flurry of script requests was like a full-time job. After taking meetings and entertaining some offers, Eric signed with an agent based on a script he previously wrote, although his winning script was what opened the door. “Though the relationship is in its infancy, the potential for access that [the agent] represents is huge,” Eric said. Fever is also currently making the rounds on the contest circuit and was a Finalist in the Creative World Awards, the New York Screenplay Contest, and the Screenplay Replay (the winners are to be decided soon). His goal is to win that contest and have his script be adapted into a novel by next year.

From the 2012 Television Spec Writing Competition

Denise Harkavy (1st place for Awkward: “Motherhood”), is currently in the process of meeting with agents. She has had some positive general meetings at the networks and overall, “things are moving ahead nicely,” she says. Denise is also managed by Heroes and Villains Entertainment, where she was interning when her status as a finalist was announced. Because of that, the management team requested the winning spec and further writing samples – work she developed for the most part in the Writers’ Program with the help of instructors Phil Kellard, Zadoc Angell, and Greg Elliot. Denise is currently meeting with agents and building her writing portfolio under the guidance of her new managers.

Sam Kendrick (2nd place for The Big Bang Theory: “Hypernova Deliberation), was contacted by number of creative executives after the winners were named. He took a general meeting with a producer and after sending his script to a pair of managers, he submitted one of his pilots to them upon their request. The managers are now awaiting Sam’s next pilot, which he is currently writing. He credits his Writers’ Program courses–specifically with the late Alan Kirschenbaum–for his preparedness for these meetings.

Matt Peabody (3rd place for Curb Your Enthusiasm: “Larry the Donor”), has had about a dozen agents/mangers request his script. He also met with a production company that wanted to go in a direction that Matt ultimately decided against. “I still have some irons in the fire. None of these opportunities would have happened without placing in the contest, so I’m very grateful,” Matt said.

From the 2012 Television Pilot Writing Competition

Mark Goldfinger (1st place for the half-hour animated comedy Lake Street Zoo), had requests for his winning script from nearly 20 management companies and agencies. The scriptalso placed in the second round at the Austin Film Festival teleplay competition. A Bob’s Burgers spec Mark rewrote in Alan Kirschenbaum’s class got him into the semi-final round [out of 10] at the Nickelodeon Writer’s Fellowship. Currently, Matt is working as a script reader for another competition, and he is writing and producing a web-series with Matt Peabody, the third place winner in the spec category.

Patrick Moss (2nd place for the one-hour drama Hand to Mouth), received a great deal of interest in his pilot and set up a number of meetings. The response has been overwhelmingly positive and allowed him to meet some very smart people with whom he hopes to work with in the future. In October, Patrick and a writing partner sold a drama pilot pitch to ABC, and they’ve been hired to write the pilot which is due in December. “Placing second in the contest was a very helpful push in getting my name out there and accelerating the progress I was making with other projects,” Patrick said.

Franklin Rho (3rd place for the one-hour drama Revelation), received a large number of read requests from producers, agencies and management companies, and subsequently he met with some great people who’ve responded well to his script. He’s still seeking representation, but feels like he has made some great contacts and is finding more opportunities to advance his career. Revelation won the CAPE New Writers Award for best TV script which led directly to Franklin being nominated for the Fox Writers Initiative. He’s also been fortunate enough to be selected as a directing fellow for Film Independent’s Project Involve program. His words summed up a common response: “I’m extremely grateful to the UCLA Extension Writers’ Program!”

The Writers’ Program wishes all of the finalists of this year’s competitions luck as they move forward in their writing careers!

For more information on the 2013 competitions, please visit: writers.uclaextension.edu/competitions/

To request copies of scripts from our 2012 finalists, please contact the Writers’ Program at writers@uclaextension.edu or (310) 825-9415.