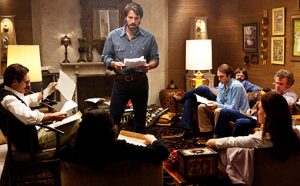 The 85th Annual Academy Awards is set for Sunday, February 24th and Writers’ Program staffers have been debating which movie is going to win the Academy Award for Best Picture.

What do you think? Lincoln? Amour? Argo? (My goodness, what’s with all the one-word titles?) There are nine nominees this year and I’m a little ashamed to say I’ve only seen one of them. That’s not going to stop me from declaring a winner though! Below Writers’ Program staffers weigh in:

Jeff Bonnett, Program Assistant for Screenwriting, and a screenwriter himself, would like to see Silver Linings Playbook win top prize. “I thought it was a great story with an outrageous ending that many actors/directors/writers could never pull off, but somehow they did and I Ioved it. Plus, it was shot close to where I grew up and I liked seeing that on the big screen.”

Alicia Wheeler, Program Representative for Creative Writing (Online) and Events, thinks the award should go to Django Unchained. Alicia, who grew up watching Westerns with her grandfather, felt the movie “was truly a unique take on that motif and endlessly entertaining. Not only were the characters captivating (who didn’t love the Irishman and all his elaborate getups?), but the characters changed and grew with the story. Not to be forgotten—the costumes and gore! The whole thing was visually stimulating.”

Katy Flaherty, Program Representative for Creative Writing (Onsite), is putting her money on Les Misérables which she thought was très bien. According to Katy, Les Mis “was visually powerful and the acting was great.”

Two staff members want to see Zero Dark Thirty win it all and that would be Brandon Covey, Program Assistant for Creative Writing (Online) and Events, and Sarah Lim, Program Assistant for Creative Writing (Onsite). “I have to throw my vote at Zero Dark Thirty for the sheer volume of the subject matter tackled,” says Brandon. Plus, “it’s timely and revealing, edge-of-your seat type stuff.” Sarah thinks, “Not only was the director great, but the actors truly played their part in making this movie come to life! Go Jessica Chastain!”

Now let’s talk Argo. Why? BECAUSE IT GOT A WHOPPING FOUR VOTES OUT OF NINE! That’s right folks. Linda Venis, Director of the Writers’ Program, Cindy Lieberman, Manager of the Writers’ Program, Chae Ko, Program Representative for Screenwriting, and me, Assistant to the Director, think so. Linda is well-informed on these nominated films and says Argo is her favorite to win. Cindy reiterates that sentiment by declaring, “This year belongs to Argo!” I personally am rooting for it because…well, as I mention above, it’s the only film I’ve actually seen, but I’m also a huge fan of just about every actor in it, and who doesn’t like a movie about a fake sci-fi movie and rescued hostages?! Truth in comedy, folks!

I should mention that while Chae declares Argo will win Best Picture, he’s much more interested in Wreck-It Ralph winning Best Animated Feature as it “was one of the best movies of the year!” That’s high praise coming from a screenwriter and movie buff such as Chae.

So who called it right? Well, we’ll all just have to tune in and see how it turns out. Now who wants to discuss best- and worst-dressed predictions with me?