What a Writer Knows Q&A with Leslie Lehr 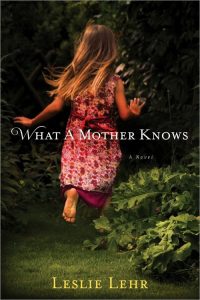 Longtime Writers’ Program instructor Leslie Lehr is celebrating the release of her third novel What A Mother Knows. In her latest work, Leslie addresses motherhood through the unconventional lens of a literary thriller; when her hero, Michelle, wakes up from a coma, her family has come untethered and her daughter is missing.

Leslie has also published several nonfiction books, is featured in two essay collections, has a produced screenplay under her belt, and in her free time blogs for The Huffington Post. I chatted with Leslie recently about inspiration, rewriting, and what’s next.

Writers’ Program: What inspired you to write What A Mother Knows? Did the central story and conflict come to you at once, or evolve as you began writing?

Leslie Lehr: The story evolved from a series of what-ifs before I began writing. I’m a big believer in thinking and planning before writing. This was originally a literary novel with parallel story lines happening in the past and present that come together towards the end. But it was dark, and hard for my first readers to remember all the details. I realized I needed to create a stronger narrative drive. So I combined the literary and commercial potential by restructuring it as a detective story. That allowed me to give the story power, while combining it with the emotional pull of a family drama. I like knowing the end and working towards it, even if it changes a bit. How can you hit a bulls-eye unless you can see the target?

WP: Your main character, Michelle, goes through a considerable amount of physical and psychological pain. Was it difficult for you to write this kind of material and to spend so much time with this character?

LL: Not at all. Michelle is like Sleeping Beauty. When she recovers from this fatal car accident and discovers she is being accused of murder and her daughter, the only one who knows what happened, is gone, she has to wake up. As she becomes stronger and more kickass, she realizes that she was asleep to some degree even before the accident. So her desire to find her daughter despite increasing obstacles far outweighed the pain I experienced with her as a writer. Of course, I cry when she cries–if I don’t, who will? But I know how it ends. And I live through all of the characters, many of whom are mothers who are very different than Michelle. My job as a writer is to know everyone’s emotions and translate them into words on the page.

WP: All of your books deal with domestic issues; what is it about family and home life that fascinates you and inspires you to write?

LL: This novel begins with a tragic death, continues with rock and roll references (particularly the Doors), has a film within a film subplot, and takes place in unique locations like Topanga Canyon, Venice Beach, Hollywood, Key West, Maui, and New York–as well as the valley suburbs. So I wouldn’t call it domestic except in the loosest terms of all people being born into a family. That doesn’t fascinate me, but the way people love each other does. That’s my entry point.

WP: You write both fiction and nonfiction–do you prefer one over the other? Are the principles of storytelling similar in both forms?

LL: At the moment I prefer fiction for long form writing, because it’s more of a playground with many toys to choose from. Nonfiction is more like homework, and easier for me to write. But I tell simple stories to prove a point in nonfiction books, so there is no comparison with the complex storytelling technique of novels. In essays, there is a whole other set of rules.

WP: You’re currently promoting What a Mother Knows at readings and signings, but what’s next for you creatively?

LL: I’ve been writing essays, including upcoming pieces in the New York Times “Modern Love” column and my HuffPostParenting blog, as well as shorter pieces for my online blog tour. Of course, I’m thinking about the screenplay version of this book. Mainly, however, I’m exploring ideas for my next novel. It has to be a story that would be good enough – and that I love enough–to follow What A Mother Knows. Tough one!

Katy Flaherty is the Program Representative for Creative Writing (Onsite). Write to her at kflaherty@uclaextension.edu.