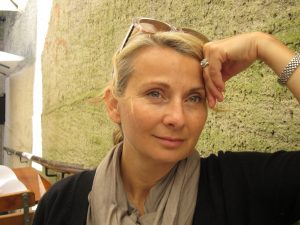 This fall, the Writers’ Program welcomes new instructor Deborah Reed to our roster of novel writing instructors! We recently chatted with her about her experience as a novelist, writing under a pen name, and her latest novel, Things We Set On Fire, which makes its debut in November of this year.

Deborah, welcome to our creative writing instructor ranks! If I remember correctly, you moved to L.A. not too long ago, right?

Thank you! I’m so delighted to be here. I moved from Portland, Oregon at the beginning of this year, and I’m still getting used to living with all this sunshine. And the traffic, but mostly the sunshine. It’s distracting in the most glorious way. How does anyone get anything done around here?

How did you get your start as a writer?

The honest answer to this question is years of hard work, determination, perseverance, and as much as anything, coming to terms with the fact that I was a writer by nature even when I wasn’t actively writing or publishing. By the time I reached my early thirties it was clear that the only pursuit I loved, the only trade I had ever felt dreamy about, was writing, and yet I’d received my BA in anthropology with a minor in German, and was about to accept a full scholarship for graduate studies in anthropology when the old adage stopped me in my tracks: How you live your days is how you live your life. I turned down the scholarship, and with a huge leap of faith, turned to writing in every way I could think of. I attended writers’ conferences and workshops, joined a writing group, took post-bac writing courses in fiction at my local university, and studied and wrote and rewrote until my writing began to take the shape of fiction, which is very different than other writing. I also went back to college and received my MFA in fiction. Having ignored all my writerly impulses for too long, it took a decade of hard work to finally get published, and this by casting a wide net—attracting an agent, an editor, entering contests, writing in two different genres under two different names. The latter actually doubled my chances of getting published. It worked. Everything was picked up at once. I’m one of those ten-year overnight successes.

Can you tell me more about writing under both your name, Deborah Reed, and your pen name, Audrey Braun?

Writing thrillers under a pen name began as a fluke. I decided to try my hand at it during the recession when genre novels were weathering the financial crisis. Frankly, I had no idea what I was doing, coming from a literary background. I wasn’t particularly confident that the thriller I wrote would be a success, so I used a pen name. It seems so ridiculous now, but at the time I figured if it flopped no one would know it was “me” who wrote it. It never occurred to me that it could also be a success and then no one would know it was me, either. In the end I kept the pen name Audrey Braun as it serves the wonderful purpose of separating my literary work from my genre work for both me and for readers. It is an open secret that I am both.

You’ll be teaching Novel Writing I in the fall. What do you find most appealing about writing novels and what is most challenging?

Overall, I love the unfolding, the discovery and surprise that come with writing a novel. But because I write in two different genres, the appeal for me is a bit different for each. With literary fiction, I love reaching deeply for language and shaping it into a rhythm that creates momentum for a character, which in turn tends to shape the plot. I love the sense of accomplishment I feel after all that hard work. With thrillers, I enjoy letting my imagination roam wildly, allowing a playful plot to take over when it needs to, and then pulling all the puzzling pieces together to make sure the pace of suspense has been doled out correctly. Of course, these things often overlap. But I never lose sight of the fact that writing is a luxury and a privilege. There is nothing quite like spending one’s days immersed in an imaginative, creative process. But of course it is a challenge, too. That very same imaginative, creative process, the very same unknown can be a scary, slippery creature that does not always behave well.

Do you any advice for someone just starting out on their own novel writing journey?

Writing fiction is a process with many stages. Assume that what you first put down on the page is probably not going to be very good, and that is OK. In fact, that is normal. Our first instincts are to pull up the familiar, the cliché, particularly when we are writing about emotions or dramatic events. It takes work and time to peel away from that which we have seen a million times to discover the fresh and distinctive voice that hides several layers underneath. Don’t get discouraged. You will get there. Just like the old joke “What do you call a writer who never gives up? Published.”

Word on the street is you have a new book coming out this fall! Do tell!

Indeed, I do. It’s called Things We Set on Fire. Of all of my novels I’m particularly excited about this one. It was the very first I ever tried to write—sixteen years in the making, during which time I wrote and published three other novels. Things We Set on Fire was a challenge for me in many ways. As my first novel it was also my “practice” novel. I learned how to write a novel by writing this one. I also learned how not to write a novel, and because so much of my learning was initially self-taught, it took a very long time. But the biggest challenge with this novel was really the story itself. It’s quite emotionally complex, and took a long time for me to get that right on the page, to stop the story from veering off into sentimentality. It isn’t easy to find fresh ways to write about pain and the intricacies and convolutedness of family dynamics, but as I said, the sense of accomplishment after having done the work cannot compare to anything else. I would surely do it all again.

I am, in fact, on a plane to Germany as I write this. I am teaching creative writing for two weeks at the University of Freiburg’s Black Forest Writing Seminar, and after that I will be traveling a bit across Europe, including a weeklong hike on the coast of Wales.

If you would like to enroll in Deborah’s Novel Writing I class, beginning October 10, you can do so online here or by calling the registration office at (310) 825-9971. Or meet her at this year’s Writers Faire on Sunday, August 25!