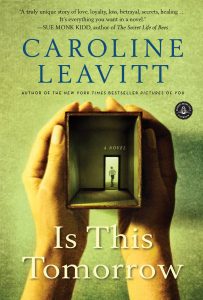 Writers’ Program instructor Caroline Leavitt has done it again. On the heels of her 2011 New York Times Bestseller Pictures of You comes Is This Tomorrow, lauded by the Miami Herald as “A page-turning heartbreaker.” Set in 1950s suburbia, the novel centers around divorcee Ava Lark and her 12-year-old son Lewis as they deal with the aftermath of Lewis’s best friend’s disappearance.

Writers’ Program: In Is This Tomorrow, you do a great job of juxtaposing the cultural norms of 1950s–so often viewed with nostalgia and longing for a “simpler time”—with the realities of being an outsider in this culture. What made you choose the fifties as the jumping off point for the novel?

Caroline Leavitt: The fifties were such a weird time. It was supposed to be a white picket fence suburban paradise, but the suburbs back then were all about everyone being the same, and if you dared to be different–or if you simply were different, you paid a high price. Setting the book in the 1950s gave me a lot of drama. Ava Lark is divorced at a time when no one gets divorced. She’s also Jewish at a time when being Jewish was virtually the same as being that dreaded of all dreaded things: a Communist. And she works at a time when mothers didn’t work.

WP: Your writing immediately transports the reader to a different time and place. From Ava’s outfits to Lewis and Jimmy’s road trip stops, everything seems very authentically of the time. How did you go about researching to get the details so spot on?

CL: After it took me three days to find out what 1950s cops used instead of crime tape (wooden saw horses and rope), I hired a librarian who was amazing. I’d ask her for one thing, like researching what people ate back then, and she’d come back with things I hadn’t thought to ask!

The greatest boon was Facebook and Twitter. All I had to do was get online and ask, “Are there any cops from the 1950s around who might talk to me?” People really responded and I was able to talk to people who had lived in the fifties and could tell me these wonderful, personal stories, which I was able to weave in the novel. I talked to a man who was one of the first male nurses in the early sixties and he told me how doctors back then routinely smoked in hospitals, and even encouraged their patients to smoke because it was relaxing! The cop I found told me how different it was looking for a missing child in the 1950s because back then there were no amber alerts or milk carton photos. They treated a missing child the way they would a missing adult, which meant they wouldn’t start searching for 24 hours, and with a child, that’s just too late.

WP: You’ve said in other interviews that some of your own life experiences were an inspiration for the novel. What is your process for taking real life experiences and weaving them into an artful fictional narrative?

CL: As any of my UCLA students can attest to, I’m big on story structure. It isn’t enough to take something that happened and write about it. You have to know why. You have to see the cause and effect and thread everything together in a way that resonates emotionally.

WP: How do you go about getting started and conceptualizing a story? Do you just start writing, or begin with an outline? Any advice for first time novelists staring down 300 blank pages?

CL: I have 30 to 40 page outlines. They change, of course, as I discover new things in the writing, and I must rewrite them about 20 times, but the outline is my lifeline.

WP: What other writers and artists inspire you? Do you have any go-to’s when you need a creative kick in the pants?

CL: I worship John Irving. He has this amazing quote, which I share with all my students: “If you don’t feel you are possibly on the edge of humiliating yourself and losing control of the whole thing, then what you’re doing probably isn’t very vital. If you don’t feel that you are writing somewhat over your head, why do it? If you don’t have some doubt of your authority to tell this story, then you’re not trying to tell enough.”

Katy Flaherty is the Program Representative for Creative Writing (Onsite). Contact her at 310-206-0951 or kflaherty@uclaextension.edu.