In Memory of Les Plesko 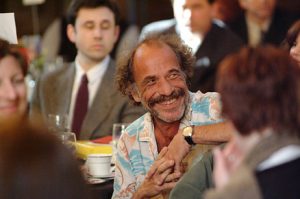 On September 16, 2013, UCLA Extension Writers’ Program fiction writing instructor Les Plesko died in Venice, California. On September 26th, over 100 people gathered at Beyond Baroque to pay tribute to the man that many present said would take one look at the gathering, say “Oh brother,” and walk out. Les despised, as Janet Fitch wrote, “…the sentimental, the cornball, the witchy-poo.” But we did it for ourselves, for our need to remember and grieve and laugh and most of all, to celebrate the exquisite gifts as a writer and teacher he so generously shared. The following is the transcript of my remarks as one of the memorial’s speakers. To quote Jamie Schaffner, one of his wonderful former students, “Les, Rest. Rest. Rest.”

I am honored and humbled to be here today, and I think Joshua Miller and Michael Deyermond for organizing this beautiful tribute.

On February 21, 1995, Les sent me a letter introducing himself, and proposed a course for the UCLA Extension Writers’ Program that he called “Life into Fiction.” Les wrote, “I believe most writers or would-be writers have, in the story of their lives, one or a handful of core events which are already shaped into a personal literature, awaiting the courage and craft to make it to the pages as realized works of art. I would like nothing better than the opportunity to impart what I’ve learned about crafting life into fiction to others who want to take the same journey.”

We had a great interview and I hired him on the spot. What I didn’t realize at the time, however, is that I had just met with one of the rarest and most gifted teachers of fiction writing the Writers’ Program would ever see. Over 18 years and 131 courses, Les was the consummate artist and mentor, leading nearly 1,000 students on their fiction writing journeys. While he worked primarily with advanced writers, Les conveyed the wonder and process of fiction writing to all levels, and with everyone, as one of his students put it, “Les always knew how to be kind in his critiques and [park] in the exact right place where encouragement intersects with reality.”

In 2002, Les won the UCLA Extension Outstanding Instructor in Creative Writing Award, and this is what he said I when asked what the award meant to him:

“Fourteen years ago, I took a Writers’ Program course and walked into my fate—I discovered myself as a writer. It started with a few good lines, a caring instructor who recognized them, the beginnings of a voice. My most thrilling moments teaching here are when a student breaks through to that voice, and everyone in the workshop knows it and feels it. It’s also swell to have confirmed, in writing, as it were, that I haven’t been spouting nonsense for 10 years.”

Les, I wish I could give you this award all over again, and thank you, from the bottom of my heart, for inspiring and guiding our students with such devotion and warmth. We miss you so much.