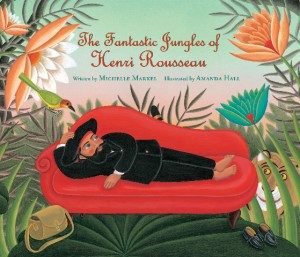 Writers’ Program instructor Michelle Markel has won the 2013 PEN/Steven Kroll Award for picture book writing for The Fantastic Jungles of Henri Rousseau. As the judges put it, “Markel’s spare prose perfectly recreates Rousseau’s calling to paint, affinity for nature, creative process and determination even in the face of complete public rejection.”

Michelle instills this sense of creative determination in her students as well: “One of the themes of my book about Rousseau is courage–having the guts to express yourself and love your own work, despite what anyone else says about it. Of course this applies to any creative endeavor, including writing. One of my great pleasures as a teacher is creating an environment where students feel safe and secure enough to experiment–then watching them play and learn. I’m constantly amazed at what feats they come up with, in a scarce few minutes, when they write without fear and self-consciousness.”