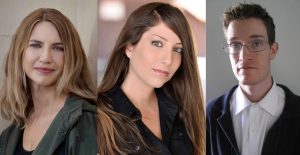 After receiving two months of 1-on-1 mentoring by an instructor, our feature film competition finalists have been named! The Writers’ Program officially congratulates 1st Place Winner, Barbara Stepansky, for Sugar in My Veins, 2nd Place Winner, Shira Rosenzweig, for Processor, and 3rd Place Winner, James Warren, for Headshot.

Last week, an ad featuring all three competition winners appeared in the October 23rd issue of The Hollywood Reporter as part of their prize. Soon, their contact and project information will be mailed to over a thousand entertainment industry executives. In addition, they’ll each receive a cash prize of $1000, $500, $250 (respectively). Read on to learn more about the finalists and what inspired them to write their winning scripts!

Barbara Stepansky: I wanted to write a movie that I would have loved to see as a teenager. I was always fascinated by Nabokov’s Lolita and was compelled to write a variation on the theme but base it on a true yet realistic human connection. My protagonists are star-crossed lovers, probably meant for each other, but separated by an age gap that isn’t easily bridged when they first meet. I also wanted to capture a certain rage and need to break out you feel when you’re growing up by encapsulating it in this almost impossible desire.

Shira Rosenzweig: I’m a neuroscientist, and the cutting-edge research I’m involved in is a constant source of creative inspiration. While purely fictional, Processor touches on real ethical dilemmas that scientists face on a daily basis, especially researchers involved in human studies. The script emphasizes the potentially catastrophic outcomes that can occur when test subjects’ well-being is left at the mercy of financial interests. I’ve encountered these principals repeatedly in the course of my scientific career, and writing this script has provided an outlet for my turbulent thoughts on the matter.

James Warren: I won’t lie; it was video games mostly. The whole culture of electronic entertainment is in a fascinating place right now, more connected and interactive than ever. I thought bringing all that into a movie would be fun. If nothing else, I hope I got the power-ups right.

BS: It was fantastic working with a one-on-one mentor, who was solely focused on [my] script’s improvement. My mentor, Chrysanthy Balis, first sent me a detailed set of notes and then we met up in person to discuss them. Many interesting thoughts emerged during that meeting. She then read several subsequent versions I sent her way and was always available to me when I had questions. She really understood what story and tone I was going for and was nothing but supportive of that vision.

SR: Different people with different points of view can identify pitfalls that the writer often can’t, which is why I think the script improved gradually with each set of notes. I was fortunate to work with Michael Weiss during the final rewrite, and his extensive experience in the field was evident from the first note – he immediately identified the weaknesses of the script and offered constructive ways to improve it. His feedback was enlightening – a real learning experience that will no doubt help me to better critique my own work in the future.

JW: Working with a mentor was a great help to my rewrite process. Steve Mazur is obviously an excellent teacher, as well as an industry veteran. He made very clear what he felt could be improved in the script, and what he thought would help get it to the next level. His feedback really pushed me through the home stretch to work out a stronger product.

Wp’: What sort of opportunities have you already experienced due to your placing in the competition?

BS: My script has been forwarded to potential managers and producers.

SR: It was a boost of confidence and validation first and foremost. While my placement has garnered me some attention (in the form of query letters), I think that it’s my belief in the quality of my own work, reinforced by this competition, that will ultimately push me forward.

JW: It’s been less than a week since the contest wrapped and I’ve already heard from management firms and production companies who have seen my script and have expressed real interest in my writing. Knowing my work has been read by industry professionals is awfully exciting.

BS: Writing what you’re feeling passionate about is key to completion and also to the seemingly never-ending rewriting process. The more you love your material, the easier it will be to keep polishing it until it shines.

SR: There’s a learning curve to this thing, and the talented writers I’ve interacted with are the reason I’m now further along on that curve. I’m grateful for their help and hope to continue that momentum.

JW: Getting back into the classroom jump-started my efforts at the typewriter, and participating in the contest helped push me to finish work that I’m genuinely proud of. I would seriously recommend the Writer’s Program to anyone interested in screenwriting.