The Winners of the 2013 Kirkwood Awards…! 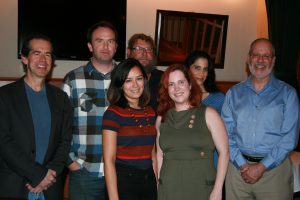 A yearly highlight of the UCLA Extension Writers’ Program is our James Kirkwood Literary Prize in Creative Writing, which gives intermediate and advanced level instructors the chance to nominate their very best students. First round judges Michael Buckley, Linzi Glass, Adam Prince, and Deborah Reed narrowed the 30 outstanding submissions down to 6, and final round judges Jim Gavin and Reyna Grande chose the 3 very deserving finalists.

Andrew Morse, benefactor of the award, then determined the 1st, 2nd, and 3rd place winners from the 3 nominees that made the cut: Margaret Spilman, nominated by Dan Jaffe; Darri Farr, nominated by Lou Mathews; and Bengte Evenson, nominated by Colette Sartor.

First place went to Margaret Spilman for her short story “Muscle Memory”. Margaret says, “I started writing this story as a challenge to see if I could capture the point of view of someone losing his memory. I wanted to connect with what must be that horrible point where you are confused but cognizant enough to know you shouldn’t be confused. As I got into the character and started to really become enveloped in his vulnerability and anger the rest of the plot evolved.” Nominating instructor Dan Jaffe was impressed with the story and tells us Margaret’s story “is quite special in the way it blends deep insight into human psyche with richly imaginative plotting, sophisticated structuring, and a careful ratcheting of tensions that leave the reader breathless.”

Darri Farr took second place for “Disco Hits”. About her experience in the Writers’ Program Darri says, “I wrote this story in Lou Mathews’ class, Art of the Short Story. My experience was fantastic. Lou’s class had a fifty year age range, everyone was writing about wildly different things, and they were all eager to get the most out of those Thursday nights. I’d moved to LA the year before and felt completely unmoored, but I found a community in that class. It precipitated this hugely positive overhaul of my intellectual and social life in LA. “ Nominating instructor Lou Mathews says, “the reason I nominated “Disco Hits” and the reason that it won a prize is that Darri Farr has a golden ear. Some writers can only replicate human speech. Some writers can hear the way that Ted Williams used to see, and select words and sound the way that good musicians do, to create scenes you not only read, but hear, with pleasure and recognition. Darri has that gift and it will take her a long way.”

Third place went to Bengte Evenson for her short story “A Modern Mythology”. Bengte says. “the story is about a woman who has to deal with an afterlife that isn’t all that different from regular life. I wrote it after I became intrigued by the idea that, even if deeply held beliefs (whatever they happen to be) are on the surface true, there is still a lot of room to be surprised by details of the afterlife that we may not necessarily have thought of.” Bengte wrote her story in a course with Wp’ instructor Colette Sartor. “Even though there was a lot of trial and error involved, the comments I received in Colette’s class really helped me focus my efforts and work more efficiently.”

Alicia Wheeler is the Program Representative for Creative Writing (Online) and Events.