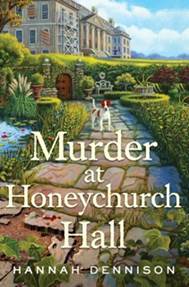 Writers’ Program instructor and former student Hannah Dennison has been publishing like crazy. Her new mystery series will launch in 2014 with Murder at Honeychurch Hall (US release in May and UK release in November); the second book in the series will be published in May 2015. The fifth installment of her popular Vicky Hill mystery series will also be out in 2015, and she is writing the screenplay for a Vicky Hill TV series for a British producer.

“I know, beyond a shadow of a doubt, that I would never have been published had I not enrolled in the UCLA Extension Writers’ Program. I credit my instructor, the extraordinary Claire Carmichael, for keeping me on the straight and narrow with her guidance, suggestions and fabulous sense of humor. As an instructor, I feel lucky to be able to give back in some small way by encouraging aspiring writers to follow their dream and not get discouraged. My one piece of advice is always the same: Just finish that awful first draft! Those who get published are those who stick with it to the finish line. No matter what.”

Thanks for the great advice, Hannah!