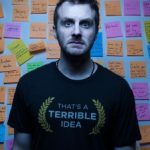 “The Writers’ Program was an amazing opportunity for me to not only sharpen my writing skills, but also meet and eventually work with professionals in the TV writing world,” says student Nicholas Anthony. He would know, having just won Best Original Half-Hour TV Pilot in the 2013 Final Draft, Inc. Big Break Contest for his script “Never Famous.”

The script, which Nicholas developed in Phil Kellard’s Advanced Rewrite Workshop, follows the antics of a family friendly talent agency. From Nicholas’ logline: “…when the curtain is pulled back you find a collection of the most degenerate, delusional, and just plain flawed characters you could imagine.” We can’t wait to see this one on the small screen!

“Whether you are a novelist, poet, or screenwriter,” says Nicholas, “I highly recommend the program. I wish I had time to take more classes.”