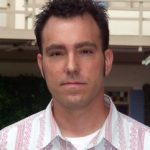 Former Writers’ Program student Tobias Iaconis recently landed on the much coveted Blacklist (2013) for his screenplay Elsewhere (co-written with Mikki Daughtry). In the years since he was a student, Tobias has been a working screenwriter, penning scripts for Universal Pictures, 20th Century Fox, Paramount, and Vincent Newman Entertainment.

Like thousands of other entertainment industry hopefuls, Tobias chased his love of film to Los Angeles. Film school, however, “was off the table–I was already buried in student loans.” The Writers’ Program offered Tobias an accessible and practical education. “I could work during the day (at an entertainment company, paying the rent and more importantly making relationships that would pay off in vital ways later in my career), and in the evening I could (affordably!) learn about the art and business of screenwriting.”

And did the classes pay off? “What I learned laid the foundation of my craft–three-act story structure, the hero’s journey, proper script formatting—and gave me crucial insight into important business considerations for any screenwriter. Finally, I made friendships in those classes that have carried me through many dark times over the years. To journey alongside good friends who share in the Silverscreen Dream was an unexpected but precious gift of the Writers’ Program. I will remain forever grateful for all of it.”

Congratulations, Tobias! We hope to see Elsewhere on the big screen sometime soon.