Announcing The Allegra Johnson Prize in Memoir and Novel Writing 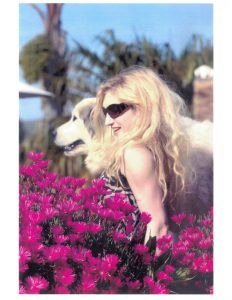 The Writers’ Program is pleased to announce a new and very special opportunity for students: the Allegra Johnson Prize in Memoir and Novel Writing!

The Allegra Johnson Prize was inaugurated on March 20, 2014 by Roberta J.M. Olson and Alexander B.V. Johnson to honor their daughter, Allegra Johnson (1983–2013), a prolific and talented young writer who was enrolled as an undergraduate at UCLA and was working on a memoir and a novel through the UCLA Extension Writers’ Program when her life was tragically cut short. Through this award, her parents hope to make a difference in the lives of promising Writers’ Program memoir and novel writing students by providing both formal recognition of their talent and financial resources to support them as they complete their manuscripts.

The award is merit-based and will be given to one memoirist and one novelist in alternating years, beginning with a memoirist in June 2015.

Manuscripts will be judged by Writers’ Program instructors, and a final recipient will be selected in consultation with Allegra Johnson’s parents. The recipient, who will be named in June of 2015, will receive a cash prize of $5,000 and will be honored at a luncheon hosted by the benefactors.

In order to be nominated for the 2015 Allegra Johnson Prize in Memoir Writing, students must have completed a minimum of 6 units in memoir, personal essay, or creative nonfiction in the UCLA Extension Writers’ Program between January 2012 and December 2014, as well as 50-75 pages of a memoir-in-progress that was initially developed in a Writers’ Program course. Students who have an advanced degree in creative writing and/or have received payment for a published memoir are considered ineligible.

Nominations by Writers’ Program’s intermediate and advanced teachers of personal essay, memoir, or creative nonfiction can be made through December 12, 2014. Nominated students will receive an application packet from the Writers’ Program, which must be completed and returned no later than February 13, 2015.

The Writers’ Program wishes to acknowledge Jennie Nash who was Allegra Johnson’s memoir teacher. It was Jennie who put Allegra’s parents in touch with the Writers’ Program when they expressed a desire to honor their daughter’s memory and her passion for writing.

We are grateful to Allegra’s parents for providing this excellent opportunity to recognize and reward the Writers’ Program’s most talented students.

For more information or to read a sample of Allegra Johnson’s literary talent, click here.