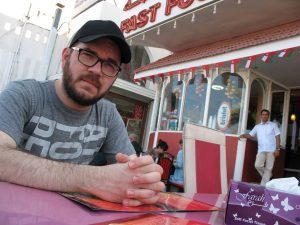 Former student J. Ryan Stradal just sold his novel, Kitchens of the Great Midwest, to Viking, scheduled for hardcover release in summer of 2015. Foreign rights for the novel have already been sold to the UK, Germany, Italy, Spain, and Holland. J. Ryan, who won second place in the 2008 Kirkwood Awards, says that his Writers’ Program experience was key in moving his career forward.

“As a fiction writer without an MFA,” he explains, “the Writers’ Program courses I took with Lou Mathews and [former Writers’ Program instructor] Rob Roberge were my writing education. Lou and Rob were patient, kind, and challenging. In their classes, I wrote two first drafts that were published years (and several revisions) later, and there is no way I could’ve written this novel without their influence and guidance.”