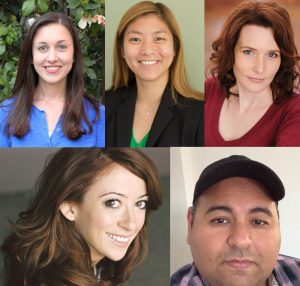 After 2 months of 1-on-1 mentoring by a Writers’ Program instructor, our television writing competition winners have been named!

3rd Place: Laura Maccabee for The Good Wife: “Too Legit to Quit”

An ad featuring the 5 winners*, will appear in the October 24th issue of The Hollywood Reporter, and soon thereafter, their contact and project information will be mailed to over 1,000 entertainment industry executives. In addition, they’ll receive a cash prize of $1000, $500, and $250 (respectively). Read on to learn more about our finalists and their winning stories!

*Laura Maccabee placed in both the Spec and Pilot Writing Competitions

Writers’ Program: What is your script about and what was your inspiration behind writing it?

Elizabeth Baron: My Parks and Recreation spec is about Leslie turning the Parks Department into a courtroom in order to defend Jerry when he is accused of breaking office equipment. The idea of Leslie taking on the legal system just seemed like such a perfect fit for her character that I had to explore the hilarious conflicts she would endure as Leslie Knope: defense attorney.

Anna Capezzera: Criminal Minds: Salvation is about one of the agents in the FBI’s Behavioral Analysis Unit being abducted while on vacation with her family. I was inspired to write this storyline because JJ, the abducted agent, has gone through numerous changes and experiences over the course of the series that I wanted to explore and showcase. As a mother, JJ is often portrayed as the compassionate, nurturing character, but recent events have toughened her up. I wanted to bring both elements into one episode, allowing her to use both sides of her personality as assets in her survival, to show that JJ isn’t just a mother or isn’t just an ass-kicking agent, but a dynamic person whose experiences, despite some being horrific, have allowed her to access these different elements to her advantage.

Laura Maccabee: My Pilot Script, Spin, came out of my love of politics, specifically all the maneuvering that happens behind the scenes, who’s playing who, that kind of thing. It’s the story of Dave, a once powerful, now disgraced Washington strategist who takes the only job he can get: advising a third-party congressional campaign in Minnesota. But when it turns out the campaign’s financier is a meth kingpin, Dave becomes a reluctant DEA informant.

In my Spec Script of The Good Wife, a man with asylum status is brutally murdered after being wrongfully deported. Alicia and Will take the federal government to court, but Will’s personal vendetta against opposing counsel threatens the case, and Alicia has to find a way around that. I’ve always loved the Alicia/Will dynamic (this spec was written in season 4), and I had been reading about the plight of Narco-Refugees, Mexican citizens granted political asylum from the terror of drug cartels.

Erin Muroski: Our script is about an unmarried but very much-in-love couple approaching 30, still waiting for a boost over the fence from Loser-ville to Successful-Adult-Town (or at least Comfortably-Making-Rent-burg). Most sitcoms revolve around a successful character or couple surrounded by wacky losers. Ours is the opposite: a blue-collar semi-functional couple with aspirations, at the age where everyone around them has already found a professional groove. The inspiration? Our lives. And we’re not alone: one in four college-educated adults under 34 are living with their parents, but you don’t see much of that on TV.

Neill Michael Nagib: Journal Square is about a radicalized Arab American Imam named Kerim who uses his considerable charm and skill to convince converts to martyr themselves in various terrorist acts in America. Kerim funds his center and activities through a series of underworld businesses that his younger brother Mo’ manages, all whilst trying to stay one step ahead of law enforcement and managing the affairs of his family. The series, as conceived, explores the roles of women in the Arab diaspora, family constructs, and the way in which Arab Americans from various socioeconomic backgrounds and belief systems relate to society and government.

I was moved to write Journal Square after the rise of the Muslim Brotherhood in Egypt. I’ve spent a lot of time in the region for work and I heard many tales of the Brotherhood’s false piety, bigotry and widespread corruption. I was attracted to the potential for conflict a religious hypocrite could inspire. As an American of Egyptian heritage, I was really passionate about the subject matter.

Wp’: What (or who) was your most influential course or instructor in the Writers’ Program?

Elizabeth Baron: I’ve taken several courses through the Writers’ Program, both onsite and online, each with unique benefits that have helped me develop some very professional writing material. I wrote the first draft of my Parks and Recreation spec through Lisa Rosenthal‘s online class which was a fantastic experience. I also worked closely with my mentor, Barry Vigon, who guided me through the polishing stages of my spec to get it where I wanted it to be. Each instructor inspired me to push myself to produce work that even impressed peers of mine who work in the television industry.

Anna Capezzera: My most influential course was “Beginning Writing for the One-Hour Drama” with Erica Byrne. My inclination is to be more of a binge-writer, which can sometimes make for tedious revisions, so that class helped me become more disciplined in planning out my storylines before jumping right into it. While it doesn’t feel quite as “inspired” at times, it makes my life a lot easier when I start writing the script. Erica really helped me hone my ability to analyze an episode for pacing and plot, and left me with the invaluable skill set of writing clean beat sheets and outlines.

Laura Maccabee: Richard Manning has been amazing. I’ve taken several of his classes, and he was also my mentor over the summer. His feedback and support are invaluable. He always has a new perspective to offer or another angle to suggest.

Erin Muroski: I’ve enjoyed learning from all of my professors in the program so far: Chris Webb, Manny Basanese, Cynthia Greenberg and Barry Vigon, who was [Elizabeth and Erin’s] mentor for this contest. I was particularly inspired by Cynthia Greenberg because she is what I aspire to be: sharp, driven, witty, organized, talented and accessible. Her “Beginning Writing for the Half-Hour Spec Comedy” was my favorite class so far. She created such a creative and collaborative atmosphere, while also keeping us on deadline and bringing in guest speakers. It was an exemplary class.

Neill Michael Nagib: Prior to attending the Writers’ Program courses I’d never taken a screenwriting class, so they were all very influential on my development as a writer. I am very grateful to Richard Manning for being a patient, nurturing and generous instructor. I had a lot of fun in the pilot writing course.

Wp’: What do you aim to do next after winning the competition?

Elizabeth Baron: I’m always writing spec scripts, and I plan to enroll in more writing classes. Now that I’ve placed in this competition, I want to use this opportunity to gain the exposure I need to take meetings and ultimately find representation.

Anna Capezzera: Since I already had my Criminal Minds spec written, I’ve been working on a few pilots. My goal is to use all of those scripts to finally get out there and start trying to get meetings.

Laura Maccabee: I’m working on a few projects, one with another student I met at UCLA Extension.

Erin Muroski: Probably just chill on my yacht. We get a special yacht for winning this, right? Then I plan on continuing to write and get better. Along the way, I’d like to continue performing and writing sketch with my comedy group Duchess Riot, and hopefully get staffed on an amazing show.

Neill Michael Nagib: I’ve been developing other ideas that I’m equally passionate about. I plan on taking other courses to continue developing the ideas and my skill set.

For more information on our annual screenwriting competitions, or to see a list of semifinalists and past winners, please click here.