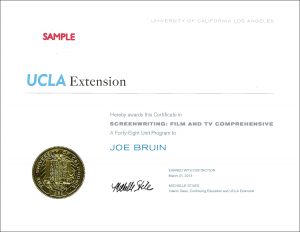 For readers who don’t already know, the Writers’ Program offers three certificate programs in screenwriting: 1) Feature Film Writing, 2) Television Writing, and 3) Film and TV Comprehensive. Certificate programs offer a structured course of study and are particularly appealing to students who want to focus on one project from start to finish. Enrollment in a certificate program comes with many perks, including advance notice of courses, a one-on-one complimentary script consultation with a Writers’ Program instructor, and participation in an Extension-wide graduation ceremony at UCLA’s Royce Hall.

We happen to think that certificates are the way to go for dedicated writing students, but in case you think we’re biased, we invited screenwriting certificate graduates from years past to contribute open-ended feedback about their experience. We reprinted some of the comments here for any prospective, aspiring writers who might still be on the fence.

In our students’ own words:

“This was an excellent experience. I wouldn’t have been able to achieve my writing goals without the foundation of film making studied in these classes. It was an outstanding journey; the instructors were so professional, experienced, and knowledgeable. Their positive feedback and constructive criticisms were so advantageous in helping me in rewrites and creating new scenes.” – Andrew Windsor, Feature Film Writing, 2014

“Understanding story structure is paramount in writing a great story. I lacked the in-depth knowledge of structure prior to taking this program. Today, I can say that I know far more about the craft and its structure than most novelists and filmmakers I know.” – Mary Swanson, Feature Film Writing, 2014

“All the classes taught me how to break my script into pieces and work from each piece instead of as a whole. They also stressed mechanics, jokes and structure of a script that helped me improve on my writing.” – Michael Barnes, Television Writing, 2013

“The program provided me with the knowledge of screenplay structure, insider tips, as well as professor-and-peer criticism that greatly improved my screenplays-in-progress.” – Francis Flynn, Feature Film Writing, 2013

“Each course helped me achieve my goal to remain on target especially with deadlines because I knew if I was doing a re-write course that every [ten weeks] I would have a new draft completed.” – Kathleen O’Sullivan Cassin, Feature Film Writing, 2011

“A great mix of instructors, all with tons of experience, wisdom, and insight into the art and craft of screenwriting, made my courses very valuable and enjoyable.” – David Taylor, Feature Film Writing, 2012

“[The Writers’ Program] afforded me the opportunity to work with instructors who are working writers today. The instructors shared their experiences in today’s entertainment culture. Also, I developed relationships with other students from around the world. I’ve been able to continue these relationships outside of class.” – Oscar L. Freeman, Feature Film Writing, 2011

“The Certificate Program was hugely beneficial in allowing me to build a concrete and polished body of work. Ideas that swirled around in my head found their way to paper and were properly evaluated and developed in the courses I took in this program.” – James Jurdi, Feature Film Writing 2013

“The four-part Writing Your First Screenplay series was outstanding. The emphasis on the ‘pre-writing’ through outlining and character development as the cornerstone, then laying the foundation of the three-act structure, provided me with the basics I need to keep writing and to venture on my own with new structures.” – Karen Kay, Feature Film Writing, 2014

“I never in a million years would have imagined that I’d have written a pilot for a sitcom. It has been an exceptional experience.” – Eric A. Walters, Television Writing, 2014

For more information about certificate programs, please visit https://writers.uclaextension.edu/certificates or call the Writers’ Program at (310) 825-9415.