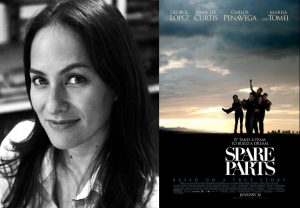 As you may know, the Writers’ Program recently announced the success of former screenwriting student Elissa Matsueda having her first film, Spare Parts, released in theaters this past January. Based on a true story, the film is about four underprivileged Hispanic high school students who formed a robotics club and competed against the country’s reigning robotics champion, MIT. Being no stranger to the Wp’, Elissa was kind enough to sit down and answer some questions on herself and her film, now that she is officially a produced writer! Read on to hear what she has to say:

Writers’ Program: You did an interview with us in 2010 when you won 1st place in our competition, but I don’t think we covered the most basic question: What made you want to be a writer?

Elissa Matsueda: I’m not one of those people who always knew what they wanted to do; I switched my major in college three times. But writing was something I always came back to. It excited me in a way that nothing else did.

Wp’: Has taking our classes played a part in that discovery?

EM: Taking classes at UCLA Extension definitely set me on the path to becoming a screenwriter. Before I moved to LA, I was primarily a fiction writer, and the Writers’ Program is where I learned the language and syntax of screenwriting. I was lucky enough to work with incredible teachers – not to mention the other students. UCLA Extension introduced me to a vibrant community of writers, many of whom I’m still in touch with now.

Wp’: Your film Spare Parts (originally titled La Vida Robot) is based on a true story. What was your inspiration and how did you go about researching it?

EM: I read [an article about the students] in WIRED Magazine – which was only about five pages – and had an instant emotional connection to it. These students were the ultimate underdogs, being undocumented and having little to no support or resources. I knew immediately it was a story I wanted to tell. But there was an enormous amount of research. My undergraduate degree is in journalism, so I went to Phoenix armed with pages and pages of questions for the real-life guys. I wanted to make sure I did justice to their achievement and to them as characters and people. On top of that, for it to seem realistic, I had to at least vaguely understand the engineering concepts. Luckily, one of the teachers (Fredi Lajvardi) was gracious enough to answer my tech questions for 2+ years.

Wp’: How did the script go from being “words on a page” to a reality?

EM: I worked with a couple producers for 18 months on the script, and then it was sent out and optioned by Pantelion, a division of Lionsgate. As soon as George Lopez signed on to play the teacher, we moved quickly into production. I pinched myself at every step, from the first table read to pre-production to the actual shoot. It’s trippy to show up on set and have this small army of people working to bring something to life that you created.

Wp’: Which of the story’s themes or characters did you identify with most as you were writing?

EM: I think everyone relates to an underdog story. That’s why these kinds of stories resonate so deeply with audiences. This particular story is bittersweet, though, because despite their successes, these young men were (and to some extent still are) held back by their immigration status, which is devastating to see. Part of the hope for this movie is that it puts a face on the immigration debate. I don’t think you can watch their story and think these kids don’t belong here.

Wp’: What’s next on the horizon for you?

EM: Right now, I’m working on a low budget film that’s set to shoot in April. It’s quite a bit darker than Spare Parts, and working those different muscles is a lot of fun.

Wp’: Thanks and best of luck with the next film!