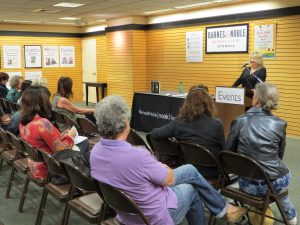 As the streetlights flickered on in Santa Monica’s famous Third Street Promenade, seven talented writers led by their brilliant mentor, filed into the meeting room of the three-story Barnes and Noble to begin their one-of-a kind performance.

As Master Class instructor Lynn Hightower took to the podium and introduced the first reader, an expectant hush fell over the crowd. Laurie Baron Peebler opened with an excerpt from her novel, Beta Zeta Katiebug. The audience seemed to hold their breath as ambitious college girl Katiebug was finally called off the bench to perform with her dance team for the first time.

Stephanie Clayton amped up the suspense when she read from her novel Cradle to Grave. In her excerpt, struggling actress Janey Pate is walking her dog one night when she finds a dead body in an alley. She screams as she discovers the body belongs to an old friend.

Laura Juell Bess read from her novel Kiambugi and her character’s humorous voice made the audience chuckle. Fresh college grad Valerie goes to Kenya as a volunteer teacher and her enthusiasm isn’t dampened even when she takes one too many uncomfortable rides across Africa just to get to her tiny village.

Kate Pickford made the audience laugh with her spirited reading of an excerpt from her novel Techtopia. In the year 2238, “The Glom,” an artificial intelligence superpower overtakes the world and declares that the human race is a pestilence that must be exterminated. However, Haddi Hardigan, senior minister, negotiates with “The Glom,” and they agree to spare the human race on one condition: humanity must abide by all rules laid out in the Bible and each sin they commit brings them one step closer to eradication.

M. Anderson read an excerpt from her novel, The Carpet. The audience commiserated with Catherine, an American teacher in Saudi Arabia who struggles to come to terms with the frightening changes in her Syrian husband when he buys a carpet she hates and refuses to consider her wishes in the matter.

The sixth Master Class student to step on the stage was Sheri Polisini, who read a moving excerpt from her novel, Miss Lotto, about Dede, a struggling single mother of a fourteen-year-old son with Asperger’s, who suddenly hits the Mega Millions jackpot.

To round out the many amazing stories, Master Class instructor and novelist extraordinaire Lynn Hightower read from her latest novel, Even in Darkness. The chilling scene in which a hired killer has a profound conversation with his intended target had everyone at the edge of their seats.

The book reading was truly an inspiring event. Master Class students got a glimpse of their future as authors, and the audience got to know six new writers, whose stories might one day populate bookstores across the globe.

The UCLA Extension Writers’ Program would like to thank Event Manager Frank Varela and the rest of the staff at Barnes & Noble Santa Monica for making the Master Class Reading a smashing success.

Nutschell Windsor is the Program Representative for Creative Writing (online) and Events. Contact her at (310) 794-1846 or nwindsor@uclaextension.edu.