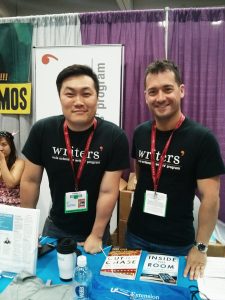 Last year, the Writers’ Program was fortunate enough to exhibit at the largest convention in the world for all things fantasy and fiction-related: SAN DIEGO COMIC-CON!

As the Writers’ Program screenwriting advisors, Chae Ko and I are suiting up once again to brave legions (literally hundreds of thousands) of fans and artists alike as they converge at the San Diego Convention Center, July 9th–12th. Armed with a ton of free swag (bags, shirts, key chains, etc.) and with the help of our new trusty sidekicks, Allison and Lexi in UCLA Extension’s Visual Arts unit, we – like any true heroes – will be making sacrifices for the greater good and helping content creators of all kinds take steps toward realizing their dreams.

While Comic Con has not released a full program guide yet, as returning exhibitors, we kind of know what to expect. Here’s what the team had to say about what they’re looking forward to most:

Chae Ko: I’m most looking forward to entering the exhibit hall before the event kicks off. As an exhibitor, we get early access to the floor so we can get set up. The feeling I get is similar

to being at an empty Disneyland park. You know there’s a storm of people coming, but for at least a little while, you get to experience the calm.

Lexi Ibrahim: I’m looking forward to the people I will be meeting there and the conversations I will be having with them. Mostly everyone there will be passionate about some sort of art form and hearing them share what they hope to accomplish in the future should be an inspiring experience.

Allison Tan: I’m most excited to see all the incredible cosplay and collectables at SDCC 2015. This will be my first Comic Con so I’m sure everything will be exciting and new. I’m looking forward to meeting people at our booth, too, and being among fellow fans.

And as for me, I am looking forward to the panels. Being a rookie last year, I knew about the big “Hall H” panels that you see on YouTube, where celebrities are interviewed and fans camp outside night and day just to secure a seat. But what I didn’t know was that in the smaller, adjacent ballrooms, many professional television staff writers, film writers, fiction writers, and comic book artists offer their time and speak to attendees about their respective crafts and industries. It’s highly informative stuff.

So there you have it! Be sure to follow us on Twitter (@WritersProgram & @UCLAxVisual) or on Facebook (Writers’ Program & Visual Arts) for live event coverage. Due to heavy traffic, internet connectivity is often spotty once the convention is in full swing, but we’ll be posting updates as often as possible and sharing our post-trip recap right here on the Writers’ Program site soon after we’re back!