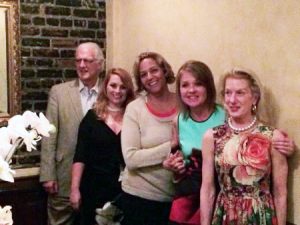 Drug addiction, murder, and sexual abuse. Such were the subjects of the captivating memoirs-in-progress of the three talented Writers’ Program students who vied for first place in the 2015 Allegra Johnson Prize in Memoir Writing.

The Allegra Johnson Prize was created in 2014 by Ms. Olson and Mr. Johnson to honor their daughter, a prolific and talented young writer who was working on a memoir and a novel through the UCLA Extension Writers’ Program when her life was tragically cut short. This merit-based and instructor-nominated award was created by her parents in the spirit of making a difference in the lives of promising Writers’ Program memoir and novel writing students. The Prize alternates each year and will be given to a novelist in 2016.

Linda Venis, director of the Writers’ Program, talked about the value of the Prize for Writers’ Program students. “Writing is a solitary act, and the forms that Allegra pursued—memoir writing and novel writing—are arguably the most arduous. With the establishment of this Prize, Roberta and Alex celebrate and memorialize their daughter’s fierce devotion to writing, and acknowledge and support other accomplished writers dedicated to taking this long journey.”

Below, Roberta Olson shares her memories of the evening and what the Allegra Johnson Prize means to her and her husband.

“Alex and I were thrilled to fly to California to celebrate the achievements of the three finalists of the first Allegra Johnson Prize in Memoir and Fiction Writing. For the seamless realization of the prize, we are deeply indebted to the class act of the UCLA Extension Writers’ Program, especially the inspired efforts of the brilliant Program Director, Linda Venis, and writing instructor-extraordinaire Jennie Nash, who was one of Allegra’s teachers. Needless to say, we are also grateful to all the other instructors and administrators in the constellation of the Program for making this Prize possible.

“Allegra would have loved the work submitted by the three finalists, whose harrowing life-changing episodes were the catalysts for their courageous memoirs, each of which was infused with vivid imagery. We enjoyed meeting these writers and hearing them talk about their lives—past, present, and future. Among the most memorable aspects of the inspirational evening was the free-ranging, ping-ponging conversation about art and artists. The electricity of creativity and intelligence, garnished with humor, carried this animated event to another level of camaraderie. All three finalists were winners in every sense of the word.”

Roberta called Henriette’s memoir about her challenging drug addiction, “an intentionally bitter pill to swallow. Her clever chapter headings create a fascinating armature for the narrative woven by her natural, powerful voice. We are delighted to learn that in the very near future Henriette looks forward to completing this brave, compelling book. Her eloquent grappling with the problems of addiction promises to raise the bar on its themes — dealing with the unknown, the monkey wrenches fate tosses into our lives, and the triumph of the human spirit — to a universal level.”

Roberta went on to say, “Happily, the submissions by all three finalists reveal that memoir writing is alive and well—indeed, fertile territory with the promise of beautifully written works that will achieve transcendence. Alex and I look forward to seeing these inspiring memoirs and other future works by the finalists, in print.”

Jennie Nash had high praise for Allegra’s parents and their establishment of the Allegra Johnson Prize. “I admire Roberta and Alexander so much — for their grace in the face of loss, for their commitment to helping individual writers on their creative path, and for their belief in the inspiring work of the Writers’ Program. I had the privilege of teaching Allegra in one of my memoir classes, and she was a vibrant person and a talented writer. What her parents have done to honor her is extraordinary.” (Read Jennie’s moving account of the evening on her blog, here.)

Adds Linda, “I can’t thank Roberta Olson and Alex Johnson enough for putting their faith and their resources in the UCLA Extension Writers’ Program.”

The Writers’ Program congratulates Henriette, Elle, and Raluca, as well as all the nominees of this year’s Prize. We encourage all of you to keep on writing!