Is a Writing Partner Right for You? 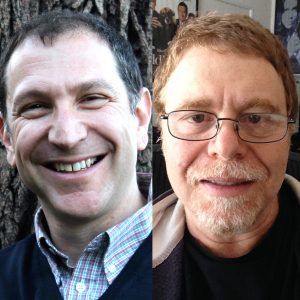 Writing a script is no easy feat, and getting it produced and made in Hollywood is a whole other animal. And once you sell your script, you have intensive collaboration with network executives and producers to look forward to. Perhaps a writing partner is the solution for you! Screenwriters David Diamond and David Weissman know the ins and outs of collaborating and have 20+ years of credits to show for it. Learn all about their not-so-secret “superpower” in their fall course, Collaborating Your Way to Success.

Writers’ Program: How does working with a writing partner benefit one’s writing career?

David Diamond: There are, essentially, two kinds of partnerships—project specific and long term. You have an idea that comes out of a conversation with someone, or you know someone you think might be a good fit for an idea you want to write. Sometimes those partnerships continue beyond the one project; sometimes they don’t. The other way is like ours, and it’s more like a marriage. This is the person I want to have my career with. The partnership comes first, the projects come and go. Those don’t always last forever, either. We’ve been doing this together for over 20 years.

David Weissman: The benefit comes directly out of how successfully the partnership is managed. If the partners are in creative sync, the product of the partnership will likely be better or more interesting than that of one of its members writing alone. If two voices speak with even greater passion or clarity in pitching a project, it’s a more likely sale. If you can create something bigger than just the sum of two, executives and producers will remember you. That’s always worked for us.

WP’: What are the strengths and weaknesses of collaborating or having a writing partner/team as opposed to writing alone?

DD: An advantage you might not think of as you enter into it: you have a partner, i.e., someone to experience the highs and lows with. That can be invaluable…if you choose the right person. I’d caution anyone against partnering with someone they have a difficult time getting along with or don’t like, regardless of how talented they may be. Even if it’s a short term, project-specific partnership, you have to respect and trust the other person, personally and creatively, or it’s a disaster. And it sure helps to like them; you’re gonna be spending an awful lot of time together.

DW: I’d add one more thing — there’s an economy of scale that’s created when a partnership is working well. We’ve always been able to work on more than one thing at the same time because we can divide responsibilities on each project, and do it in a way that works to each of our strengths. One of us takes charge of the more dramatic projects, and the other the more comedic projects.

WP’: Since filmmaking is a highly collaborative medium, what is the #1 tip you can share with new writers on how best to collaborate with directors, producers, actors, executives, etc.?

DD: Listen before you speak. The feedback you get from those you collaborate with is all information about how to make your script more effective. You don’t always have to do what’s being suggested in the way it’s being suggested. It’s often best not to. But you have to listen and understand where the feedback is coming from, and, most often, finding a way to address what will improve your script and your reputation as a team player. This is actually what our course is all about, so if this is a big question for you…we’ll see you Tuesdays, October 27-Nov. 17, 7-10PM!

DW: As much as it seems like sometimes producers and executives are only giving notes to justify their existence or hear themselves talk, I’ve found that that’s usually not true. If someone’s giving a note, it’s because something came up while reading your material. Trust that. Don’t dismiss a note because it’s easy or convenient to say “they just needed something to say.”

WP’: When in disagreement, how can writing partners come to a compromise while still maintaining ownership of the material as it is being written?

DD: Again, this is a lot of what we’ll be dealing with in our class. It’s the secret sauce. There is evidence to suggest that the best learning is done in pairs. The goal of disagreement shouldn’t be to win the argument for the sake of ownership, or being “right.” The goal should be to arrive at the truth or the best answer. If you’ve done that you’ll be very proud to feel ownership over the material, regardless of how much you may have moved from your initial position.

WP’: What is the working relationship & credit distribution for the both of you, and do you recommend your system over others?

DD: Our working relationship is pretty simple. We plan everything together in very specific detail, down to runs of dialogue within scenes. Once we’ve got all that down, one of us takes the lead in writing the draft. We pretty much always know which one of us that will be before we start planning, though there have been projects where it’s switched mid-stream because of a shift in tone or creative direction. Whoever starts the draft writes all the way through, followed by the other. Oftentimes, after numerous drafts have been written and notes have been responded to, we can’t even tell anymore who’s written what (well I can’t, Weissman probably can).

DW: We have a great partnership because we don’t count who did what on a draft or a project. What we know to be true about us as a writing team is that one plus one equals three. The successes accrue to the partnership as do the failures. It’s our super power.

Sign up for Collaborating Your Way To Success with David and David and find out how two is better than one.

Phoebe Lim is the Program Assistant for Creative Writing (Online) and Events.