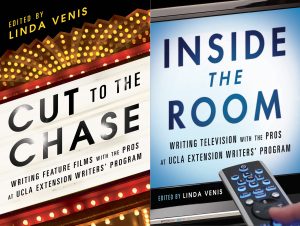 While no educational experience can replicate working with a professional screenwriter in a 10-week screenwriting course, we know that sometimes time and/or money is in short supply. But that doesn’t mean your screenwriting education has to come to a halt, especially when you can get practical, timely, and valuable feature film or television writing information from the pros at the UCLA Extension Writers’ Program for less than $20.

These highly practical and entertaining “how to” books are the culmination of a four-year process which brought together the talents and contributions of 24 Writers’ Program instructors-chapter authors; editorial board members; Writers’ Program staff members; a literary agent; a cadre of pros at Gotham Books/Penguin Group; and above all, the books’ editor, Linda Venis, who also happens to be the director of the Writers’ Program. First released in August 2013, Cut to the Chase and Inside the Room have carved quite a niche for themselves on bookstore shelves everywhere, and are now among the most sought-after resources for aspiring writers. In fact, Cut to the Chase has been cited so often by our instructors that it has become the required text for all “Writing the First Screenplay I” courses, both online and onsite.

Adding to the wealth of valuable information at your fingertips, are on-camera interviews with 17 Writers’ Program instructors and co-authors who shed further light on the topics they discuss in their chapters. View them on the WP YouTube Channel at the links below:

Cut to the Chase: https://www.youtube.com/playlist?list=PLkKIvCE07OiyRD6QeA6OjRHttME-QYm6c

Still not convinced? Then maybe these industry insiders will persuade you:

“Cut to the Chase is a great value for aspiring screenwriters, leveraging the knowledge of many Extension instructors with the collective experience of 20 produced feature films in one volume. From the inception of the idea to the post business of taking meetings and pitching, this book has it all.” ~Iris Yamashita, Academy Award Nominee for Letters from Iwo Jima

“Cut to the Chase cuts the fat out of the screenwriting process. It’s lean and mean without being intimidating. I think it’s incredibly smart and cuts close to the bone of what really makes a great movie; less is really more with these wise guides taking the grizzle out of process!” ~Karen Leigh Hopkins (Because I Said So, Stepmom)

“[Inside the Room] should be required reading for anyone embarking on or dreaming of a career in television. Like the classes I took at UCLA Extension when I was starting out, it demystifies the process of becoming a working television writer and tells you how to go about it. Most of all, it lets you know it’s possible.” ~Writer-producer Carol Barbee (Touch, Hawaii Five-O, Jericho)

“Aspiring television writers have found their bible in Inside the Room. It is an honest, insightful and incredibly accurate depiction of how the modern television system works. No book can guarantee success, but this one will get you as close as any can!” ~Lee Hollin, VP, Current Programming, CBS Television Studios

If you want the best way to sample what the #1 open-enrollment screenwriting and television writing program in the country has to offer, look no further because these books are it.