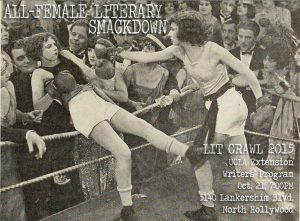 Join us as three Writers’ Program instructors/writers with a fabulous flair for comedy go to the mat (literally!), to compete for the title of funniest storyteller. With comedy aficionados Erika Schickel, Melinda Hill, and Rachel Kann performing, and the always hilarious Tod Goldberg (an award-winning author and former WP instructor) as emcee, it’s a sure bet you’ll gleefully guffaw the night away.

The Writers’ Program’s All-Female Literary Smackdown is part of Lit Crawl 2015, a free public event that will be held in various venues throughout the hip NoHo Arts District on October 21. The Writers’ Program’s gut-busting presentation, one of 40 lively literary happenings planned for this year’s event, takes place on the mat inside the XMA World Headquarters at 7pm sharp. We promise you a night to remember, folks, so don’t just read about it on Twitter; come be a part of it! 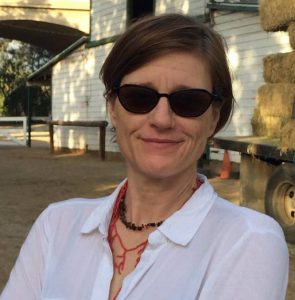 Trust me when I say that our performers are taking this very seriously! Even as we speak, they are getting into “fighting” shape, each in their own comical way. Erika is taking the Rocky approach by “dead-lifting metaphors, putting raw egg in my lattes, and running up and down the steps of Royce Hall at dawn.” 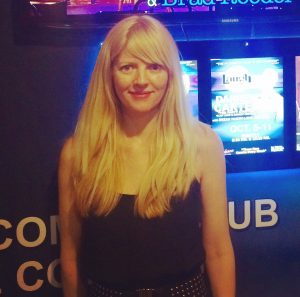 Melinda is testing her material out in front of a live audience. “I’m prepping by performing 14 shows in Vegas because if there’s anything Vegas audiences love, it’s clever and subtly nuanced humiliating, unnerving, mortifying, outrageous, and ridiculous moments.” 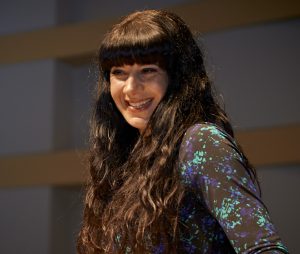 Rachel’s approach is spiritual: “I’m a lover, not a fighter, and as such, my weapons include hearts, flowers, moonbeams and love-muffins — unbeatable and delicious.” Awww! 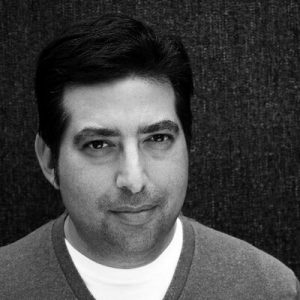 Even our emcee is getting into the act. When we asked Tod how he’s preparing for the event, he told us: “The same way I prepare for everything: curled up in a ball, sitting in the dark, binge watching Chopped. I feel this will make me all powerful and ready for any challenge.”

Now, which one of our three funny ladies will display the best comedic chops and take home the trophy? YOU be the judge. Join us ringside to urge the competitors on, and then cast your vote for the winner of the Writers’ Program’s first-ever Literary Smackdown!