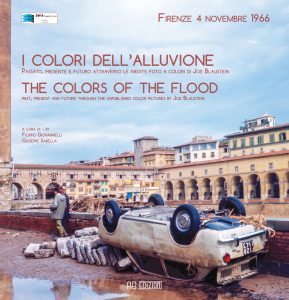 When longtime instructor Amy Friedman walked into her Writing the Personal Essay classroom at the 2015 Writers Studio, she knew the next four days would be special. “Whenever I teach at UCLA Extension,” she says, “the students astound me with their intelligence and ability.” This year, there was one especially astounding student. “Every once in a while someone comes along who bathes the room with what Julia Cameron called ‘Spiritual Electricity,’” explains Amy. That someone was Joe Blaustein, a 92-year-old former advertising executive who has been teaching studio art at UCLA Extension for almost six decades. Amy describes Joe, a lifelong learner, as “a man of such vision, energy, intelligence, and humor, that whenever he spoke or read from his work, the whole room lit up.”

Now, Joe brings his light to Florence, where Italian publisher AB Edizioni has released The Colors of the Flood: Past, Present and Future Through the Unpublished Color Pictures by Joe Blaustein, which includes diary entries from his 1966 trip to Florence. Colors of the Flood was selected as the official book commemorating the 50th anniversary of the Great Flood, when dozens of Florentines were killed and fine art and rare books destroyed.

We chatted with Joe recently about art, teaching for Extension, and how he became “an angel” to the city of Florence overnight. 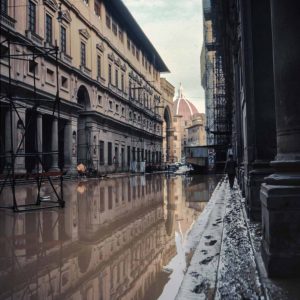 Q: These incredible photos of the flood, taken in 1966, are just resurfacing now and have been included in a book commemorating the event. How were the photos unearthed after all this time?

A: In the last decade I’ve made four trips to Italy. In looking for places to stay I came across some pictures on the internet, black and whites of the horrific flood of 1966, which I experienced on a trip with my pregnant wife. I remembered the slides I took all those years ago, and felt the pictures properly belonged to the city of Florence rather than getting moldy in my basement. So I digitized them and made contact with a man, Anthony Finta, who contacted the head of Unesco in the area. A meeting was arranged with the head of the archives of the city. When he saw the pictures, he was astonished. They had no pictures like them. He claimed I was an angel, helping preserve “the memory of the city.”

Q: Most of your creative work has been in the area of studio art – painting, drawing, etc. Do you consider these photographs to be a departure for you, or do they still express your personal style in a different genre?

A: The pictures in the book, I feel, are no different than anyone with a camera in that situation would have taken. I just happened to be there. They are reportorial, rather than “art.” I had very limited film and used old twin lens Rollei reflex (no exposure meter, all guess work).

After my wife died in her late forties, I took ten carousels worth of 35 mm transparencies. Rather than a departure from painting, they became an addition, and helped me recover from grief. The few artist friends who have seen them think they’re extraordinary. 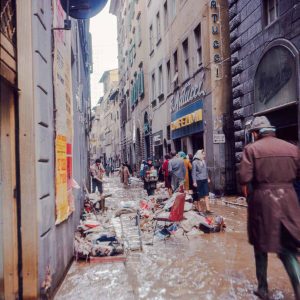 Q: As one of Extension’s longtime, dedicated instructors, what is it that keeps you coming back year after year?

A: When I was first asked to teach (in 1956!) I was working full time as vice president of advertising of a national corporation. I had taken several Extension Art courses and also had several paintings in LA County Museum shows and a one man show in a La Cienega gallery. I continued working in advertising until I retired at 65. But I kept teaching. Why? Because in teaching I feel I have value. Particularly in adult education, where students don’t HAVE to attend; they’re spending money, fighting traffic and parking, and giving up time to learn. If they’re here, they’re here for a reason, and I want to help them discover why. It isn’t that I’m altruistic, it’s simply that I take pleasure in seeing them learn and progress.

Interested in studying with Joe or Amy? Amy will be teaching Writing the Personal Essay: A 2-Day Workshop in winter quarter, and Joe will be teaching Beginning Figure Drawing in the spring (check back February 1st for full course details).