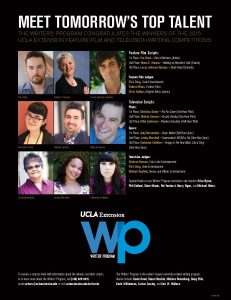 This week, the Writers’ Program formally congratulates the top 3 winners of each category of the UCLA Extension competition for Feature Film Writing, Television Spec Writing, and Television Pilot Writing. An ad featuring all nine writers was just published in the December 11th issue of The Hollywood Reporter (on shelves now!). In early January, the Writers’ Program staff will publish and mail their contact and project information to over a thousand entertainment industry executives (producers, agents, managers, etc.) via newsletter. In addition, each finalist from 1st place to 3rd has been awarded a cash prize of $1000, $500, $250 (respectively). Read on to meet our finalists and learn about their winning stories!

The pitch: After a stroke puts his boss/mentor in a coma, a Hispanic enforcer for a Los Angeles Korean criminal organization fights to defend the man’s family from dangerous challengers to the throne.

The pitch: Set in the 1940s, a dutiful and underappreciated housewife embarks on an unrelenting search for her missing teenage daughter; what she finds changes her world forever.

The Pitch: A hitchhiking musician gets picked up by a West Virginia wildcard who gives him a calamitous crash-course in the magic of life.

1st Place: Judy Bernardino, author of Veep: Mabel (a half-hour comedy).
The pitch: Realizing that her reputation for being an angry woman is holding her back from true success, Selina struggles with the delicate art of campaigning during a presidential visit to the site of a natural disaster.

The pitch: When legendary hunter Bill Brody is murdered, Sam & Dean Winchester track down the mysterious biker who killed him. But when they discover the biker is another hunter, who claims Bill was in league with the monsters, the Winchesters must decide who to trust.

3rd Place: Catherine Kelleher, author of Orange Is the New Black: Like A Drug (a one-hour drama).

The pitch: A devastated Alex returns to a Litchfield with a new world order and Piper can’t hide her delight. When Alex discovers the truth behind her re-incarceration, Piper learns that her desperate attempt to have family again may have cost her everything.

The pitch: Ten years after her entire family is slaughtered by a shape-shifting Fox Demon, an audacious young Korean woman tracks the Fox Demon down to the small town of Chasse, Louisiana. There she must team up with a cynical American supernatural hunter to figure out which of the townswomen is actually the Fox Demon in disguise and kill it before it kills again to assume a new identity.

The pitch: Brother Eli, a Jesuit who has lost his faith in God and the church, teams up with Gracie, a former FBI agent, to investigate an angel apparition, only to uncover a heinous crime and possible evidence of Christ’s return.

The pitch: Two clowns / executioners do whatever it takes to make it big in a fantasy kingdom of goblins, trolls, knights and wizards, where everyone is kind of a dick.

Tune in next week to hear what the finalists have to say about winning the competition!