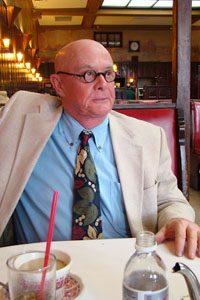 It is with a keen sense of loss to the writing community and the UCLA Extension Writers’ Program that I acknowledge the recent death of Dan Fante, who taught novel writing from 2012 to 2015. In early November, Dan informed us that he had cancer and was taking a break from teaching to focus on his health. Writers’ Program only recently learned that he had passed away on November 23, 2015 when a fellow instructor sent us this tribute published in The Guardian: http://www.theguardian.com/books/2015/nov/25/dan-fante-underground-writer-legacy-chump-change-mooch

Dan came to the Writers’ Program loaded with professional credentials: eleven published books, including the memoir Fante: A Family’s Legacy of Writing, Drinking and Surviving, which explored the author’s relationship with his father, the Los Angeles novelist and screenwriter John Fante. At this phase of his career, Dan said, he relished the opportunity to work with new writers, noting that “the process of mining ideas and exchanging opinions about writing, premise, and story development can have the effect of stimulating the individual—[of] allowing their own potential as a writer to emerge.” Plus, he said, working with beginning writers in a workshop setting was “fun and exciting,” and “a great stimulus to my own creative work.”

The students, in return, soaked up Dan’s wisdom, encouragement, and mandate to produce pages at a level that constantly aspired upwards. They particularly responded to his incisive, dead-on critiques and attentive presence. For at least one student, the experience was transformative: “Dan really transformed my thinking, story development, and writing.”

The Writers’ Program extends its sympathy to Dan’s family and remembers him with fondness and respect.

Director, Department of the Arts and Writers’ Program