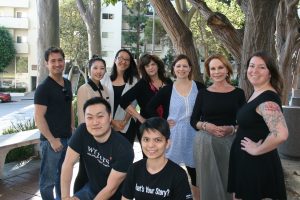 Happy New Year! I hope we can still reference the new year even though we’ve been back in the swing of office life for the last three weeks! While we’ve been busy, busy answering your calls and emails, it’s not all work and no play here at the Writers’ Program—naturally, we’ve taken time to check in on how everyone’s holidays went and, most importantly, what shows, movies and books we all enjoyed! Since I am short on time and have a night owl for a child, I appreciate recommendations from those whose opinions I value when it comes to entertainment. Lucky for me, there’s a wide variety of tastes represented amongst our staff and I trust them all to steer me in a direction I’ll more than likely like. Enjoy the recommendations I gathered from all the Writers’ Program staff below!

Chae Ko, Screenwriting Program Representative:
Lately I’ve been digging a web-comic turned anime/manga series titled One-Punch Man. It’s a ridiculously kinetic series with an even more outrageous premise about a guy who trains super hard and becomes the strongest superhero of all time. He can literally kill any villain with one punch. But with great power comes great boredom because there’s so little challenge. It’s quite interesting to see how an apathetic hero deals with his everyday life.

Jeff Bonnett, Screenwriting Program Advisor:
I recently saw the Rocky spin-off/sequel CREED and being a fan of the previous films (and also being from Philadelphia) I thought it was a great return to form for the series. Also on the lighter side, THE NIGHT BEFORE was a hysterical buddy comedy set on Christmas Eve. Both are highly recommended!

Katy Flaherty, Creative Writing Program Representative:
I loved the new Jessica Jones series, which is streaming on Netflix. It’s a superhero story with a badass female protagonist, who has superhuman strength but is haunted by the man/super villain who uses mind-control to draw her into a sick, abusive relationship. The writing is strong and the acting is excellent. Binge-watch away!

Sarah Lim, Creative Writing Advisor:
I’ve really been enjoying food documentary series like Anthony Bourdain’s Parts Unknown and Chef’s Table. These shows are so unique and interesting to watch because you not only learn about the different types of food, but you also learn the history and culture of each country through the food. For a foodie like me, it’s the perfect show!

Nutschell Windsor, Creative Writing (Online) Program Representative:
One book I can read (or listen to) over and over again is Ready Player One by Ernest Cline. The story follows penniless teenager Wade Owen Watts as he journeys through the virtual realm of the OASIS in a massive treasure hunt started by an eccentric software billionaire upon his death. While the book is the ultimate geek fairytale, even non-geeks will appreciate the story’s amazing plot, three-dimensional characters, vivid setting, and the narrator’s entertaining voice.

Phoebe Lim, Creative Writing (Online) Program Advisor:
Grandfathered is my favorite fall television newbie. The show knows its tone and the comedy bits literally have me LOL. The film Room definitely earned it’s nomination for an Oscar. Brie Larson and Jacob Tremblay (who plays the 5-year-old son) did a beautiful job of bringing the story to life in an honest, vulnerable, and touching way. In the book category, I’m torn between I am Malala and Mindy Kaling’s Why Not Me? Yes, I’m aware they’re worlds apart, but both memoirs uplift and inspire women everywhere.

Cindy Lieberman, Program Manager:
I never thought I’d be rooting for a crazy stalker guy until I read You by Caroline Kepnes. Despite the creepy subject matter the book is fantastically fun, with a disturbing focus on social media (you’ll think twice before posting your next Tweet!), plus dozens of references to contemporary books, movies, and songs (Honeydrippers anyone?). The sequel is coming out in February and I’m counting down the days.

Linda Venis, Writers’ Program Director:
For a charming read to beat the post-holiday blues, check out the Swedish bestseller A Man Called Ove by first-time novelist Fredrik Backman. Ove’s a miserable, 59-year old neighbor from hell who’s lost his wife, his job, and is trying, with a spectacular lack of success, to lose his own life. The end of the journey is familiar: lonely soul finds renewed meaning in life through human connection. But it’s the getting there, particularly as Ove’s personal history unfolds, that moves and delights.

What have you been reading/watching lately? Share your thoughts in the comments section below!

Carla Janas is the Assistant to the Director. Contact her directly at cjanas@uclaextension.edu or 310-267-4888.