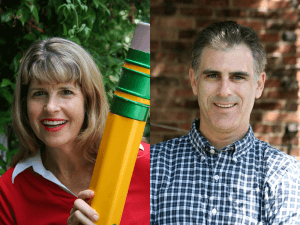 As instructors came up one-by-one to accept their award, each expressed their gratitude toward not only their administrators, but overwhelmingly, they were appreciative of their students. It was a nice reminder that teaching is a reciprocal act: both parties walk away with something in hand, whether it’s literally in the form of a finished manuscript or screenplay or insight into their own day-to-day application of their craft.

Before the big ceremony, we asked staff and students alike what they had to say about the two honored Writers’ Program Winners, April Halprin Wayland and Michael Weiss! Read on to see what they and their distinguished instructors had to say:

April Halprin Wayland is author of seven picture books, including It’s Not My Turn to Look for Grandma! (Knopf) and New Year at the Pier: A Rosh Hashanah Story (Dial), named Best Jewish Picture Book and winner of the Sydney Taylor Gold Book Award. Ms. Wayland also won the Myra Cohn Livingston Award for Girl Coming In for a Landing: A Novel in Poems (Knopf) and has won seven poetry awards from the SCBWI.

April, on receiving her award:

“Striking a match to the kindling that is our students, watching each class ignite into a tribe, a community of writers, has been both frightening and an incredible honor year after year. To receive this further honor has lit me like a Southern California red tide. Honestly, I feel incandescent right now.”

“Not only is April some kind of genius of rhyme and language, but she is a fabulous instructor—clear, endlessly inventive, and no-nonsense. I have learned more than I thought possible and had a great time doing it.”

“This class was vital to my growth as a writer, and I know it has permanently changed the landscape of my art. I am so grateful for April’s support and real investment in our work.”

“April is encouraging, well-organized, positive with critiques, and passionate about sharing her knowledge. All in all, she’s one inspiring and wonderful instructor!”

Words from our staff:

“April goes above and beyond for her students, bringing a literal suitcase full of children’s books to class each week. She radiates positivity and passion for the subject, but holds her students to vigorous standards so they emerge with the knowledge and resources to continue on their writing journey.” – Katy Flaherty, Writers’ Program Representative

“April is one of the most memorable teachers I have ever met—her passion, sincerity, and kindness is all around her. The first time I met April, she brought me a pot of yellow daffodils as a ‘just because’ gift and that simple gesture captures the essence of who April is.” – Sarah Lim, Writers’ Program Assistant

“With support, humor, creative exercises (one of which involves Play Doh!), motivation, and tons of insight, April educates students in what she calls the ‘miracle’ of the picture book.” – Linda Venis, Writers’ Program Director

Michael Weiss is a screenwriter, WGA member, and former vice president of production for Miramax Films whose produced credits include Journey to the Center of the Earth; Hostel: Part III; and I’ll Always Know What You Did Last Summer. Mr. Weiss has sold original material and been hired on assignment by such studios as Warner Bros., Sony, New Line, MGM, and Universal, and is a contributing author to Cut to the Chase (Gotham Books/Penguin).

Michael, on receiving his award:

“I am incredibly honored to receive this award. I love teaching, I love being a part of the UCLA Extension Writers’ Program. I have met so many great, interesting, smart people at UCLA, including students and co-workers. Everything we do at the program is always top-notch, high class, with complete dedication from all the staff. Beyond teaching, being a part of the UCLA community has really enhanced my life. As I tell my wife, it’s really not work, for me it’s just fun.”

“Michael has a tremendous talent for seeing the greatness in a story concept and helping each student to move their concept forward.”

“Michael really listens to and engages the class in everyone’s story, and goes above and beyond to work with you on your material.”

“Michael always uses film clips and scripts to perfectly enhance the material. He changes content to appeal to the nature of the student’s own screenplays. Further, he varies the material so that students who are repeating the class continue to be inspired.”

Words from our staff:

“If I could, I would clone Michael and have him teach all 200 screenwriting courses each year.” – Chae Ko, Writers’ Program Representative

“Michael’s experience both as a development executive and screenwriter lends to his ability to harness two separate parts of the brain—the analytical and the creative—so as a teacher, he’s able to breakdown the creative process into learnable parts.” – Jeff Bonnett, Writers’ Program Assistant

“Underlying all of Michael’s teaching is a level of caring, generosity, and positivity that DEFIES the common show business maxim of ‘It’s not enough that I succeed. Others must fail.’ He is sincerely committed to helping his students do their best work.” – Linda Venis, Writers’ Program Director

Please join the Writers’ Program in congratulating April and Michael! We thank you for sharing your talents as writers and teachers with us all!