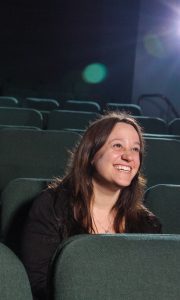 Adi Blotman won first place in the comedy category in the 2015 Final Draft Big Break Contest for her script Reality Check, the same script that landed her in second place in the 2014 UCLA Extension Feature Film Competition. Adi credits the Feature Film Writing Certificate Program for her success, which she says “helped me turn a nugget of an idea into a script I am extremely proud of. I am especially thankful for my brilliant, helpful teachers and mentors Andy Guerdat, Cindy Davis and Donald Hewitt.”

Check out Adi’s winning logline: A secret experiment allows Julia, an unhappy underachiever, to visit parallel realities, and see what her life would have been like had she made different choices.

Congratulations, Adi! We can’t wait to see what you do next.