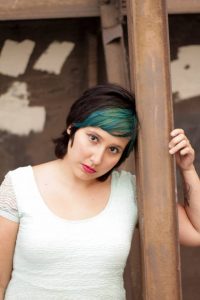 2015 Writers’ Program Scholarship recipient Lisa Gomez, who is pursuing a Certificate in Feature Film Writing, has won the 2016 Writers Guild Foundation Festival Pitch Competition. Lisa was one of 10 finalists (out of 200 entries) to pitch her script for three minutes in front of 300 aspiring screenwriters and several industry judges. Lisa won big with her pitch, and will receive a script read and meeting with Christopher Lockhart (Story Editor at William Morris Endeavor), two script evaluations from The Black List website, and a Capital Badge to the Austin Film Festival which gives her access to over 60 screenwriting sessions, the full film line-up (eight days and over 180 films), script readings, and invites to five Festival parties. We’re so thrilled for Lisa and know she’ll take great advantage of these amazing opportunities.

Lisa says that her Writers’ Program instructors have been essential in helping her make effective pitches. “Ron Suppa and Andrew Guerdat taught me the importance of a great pitch; they both made it a mandatory part of their classes and that prepared me for the nerve-wracking pitch I had to do. Philip Eisner helped me with the clarity of my script, which allowed me to narrow down the important beats in my story that I used in my pitch.”